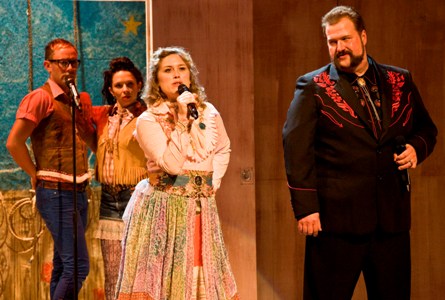 ‘I’ve Never Been So Happy’

Set in Texas, “Never Been” is supposedly about love, both thwarted and triumphant; a contentious father-daughter relationship; a reunited mother and son; a mountain lion (yes, a mountain lion); a pair of plucky dachshunds (yes, dachshunds); a formidable female sheriff; a singing/dancing troupe from a Hee-Haw sort of TV variety show; a wymyn’s (sic) commune and frequent invocations of the traditions and values of The Ol’ West.

Good luck with trying to fit all that into some coherent narrative.

It’s zany, preposterous and over-the-top but, as Jerry Seinfeld & Company so famously noted in one episode, “not that there’s anything wrong with that.”

For something zany to work, however — even in a madcap musical — requires wit (see Ludlam, Charles). Alas, “Never Been” never provides so much as a nanoparticle of wit. You find yourself thinking “What were they thinking?” (the creative trio of Kirk Lynn, Thomas Graves and Lana Lesley) when they threw this thing together and then instructed the cast to ham it up. Perhaps the hamminess is meant as a wink to the audience not to take things too literally.

As singers, the players aren’t half-bad: Lowell Bartholomee, as Brutus, the domineering father and star of the Country and Western Comedy and Variety Hour; Meg Sullivan, as Annabellee, his adult daughter yearning to be free; E. Jason Liebricht, as Jeremy, the young man exiled by his mother but now returned as Annabellee’s love; Cami Alys, as Julie, Jeremy’s mother who ties him — yes, with ropes and knots — to a mountain lion when he reaches adolescence to toughen him up; Peter Stopschinski, composer/lyricist, keyboardist for the six-member orchestra and the mountain lion who apparently regards having an 18-year-old male human tied to its— back? tail? — as all in a day’s work for a Puma concolor; Jenny Larson as Sigmunda, one dachshund, and Paul Soileau as Sigfried, the other; and Kerri Atwood, as the bitchy-butchy sheriff.

Credit must also be given to the dancers who double as a sort of cornpone Greek chorus: Noel Gaulin; Hannah Kenah; Lana Lesley and Erin Meyer. They sing and dance quite nicely, segueing smoothly from line-dancing to ballet to ballroom.

The silliness of “Never Been” is not confined to the stage. The theater lobby is tricked out like a carnival midway with games, gimmicks and garb (10-gallon hats, sombreros, serapes, sun bonnets, etc.) which audience members may don prior to taking their seats and wear throughout the play and the 20-minute intermission. Theater ushers and staff roam the lobby in Western duds, aiding and abetting the fun and games.

Even more curious is the program note acknowledging support from the National Endowment for the Arts; the Recovery and Re-investment Act of 2009; the Orchard Project Theatre Residency Program; and the University of Texas Musical Theatre Initiative.

Well, as they say in Texas — “you can put a cow flop in the oven but that don’t make it a pie.”