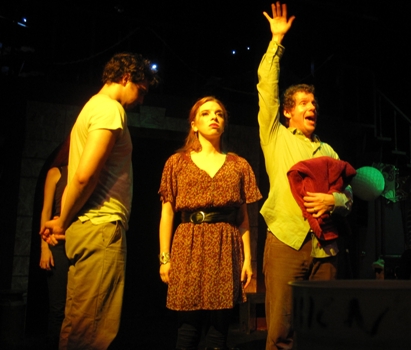 ‘Jacques Brel Is Alive and Well and Living In Paris’

Jacques Brel is still alive [in spirit, at least] but not well [he died in 1978], and living no longer in Paris, but wherever his music is being played.

Still, this is about the music of the idiosyncratic Belgian, Jacques Brel. Not for him hackneyed rhymes of “June-moon,” “true-blue-you” or “please-Louise” lyrics; he was a realist who wanted you to smell, taste, see and feel his songs, not simply hear them.

Consider “Amsterdam.” It forces you to stare at garishly lipsticked and rouged faces, to smell the stale sweat of unwashed sailors, to feel the spongy asses of tired old whores, to wince at the throat-burn of raw, cheap whiskey. It shoves you into the middle of a tough harborside bar, even if you’ve never been outside of Omaha:

AnnaLisa Erickson conveys that punch of “Amsterdam” very well—but halfway through, she’s suddenly joined by M.A. “Marco” Gomez who pops through an upstage curtain with a hand-held mic and growls, even howls, about those sailors and whores. Startling, yes, but puzzling; it’s his one and only appearance on stage and has no connection to the eight other performers we’ve been watching for close to an hour.

Similarly, Mary Mather’s “Timid Freida” is interrupted mid-song when a spot suddenly picks out Roxanne Schreiber, house-right, in the audience; she stands and sings—beautifully, but inexplicably—the remainder of the song. Like Gomez, she is one-and-done.

To paper over the fact that “Jacques Brel” is, after all, only a revue, Abramson and Baran conjure up a large, extended family rummaging through grandma’s cluttered attic. An old trunk, filled with photograph albums and keepsakes, reminds them of lives past and present and Brel, of course, has a song that expresses the appropriate mood.

The one-shot Gomez and Schreiber are presumably what? First cousins, once-removed?

At the Village Gate in New York City, where “Brel” premiered, there was neither space nor need for a set; the four performers simply did their thing, sometimes jointly, sometime solo, in the best tradition of cabaret. Why Abramson and Baran decided to add a hokey setting—which often leaves many of the cast standing idle as if in a union hiring hall—is another puzzle.

Burkhart, Miller and Barletta have strong, clear voices. Burkhart deftly tells the embarrassment and anxieties of a recruit moving along the army’s conveyor belt in “Next:”

The four female performers are equally good. I’m particularly taken by Yount, whom I’ve seen in other plays; she’s as slim as the chances in an audition but packs one helluva lot of energy in her slender frame. Towers-Rowles captures the heartbreak of parents whose sons have grown and left home, some to war and some to—who knows?—in “Sons of”:

But it is Brel’s music—and often-painful lyrics—that carries the evening. And beyond.