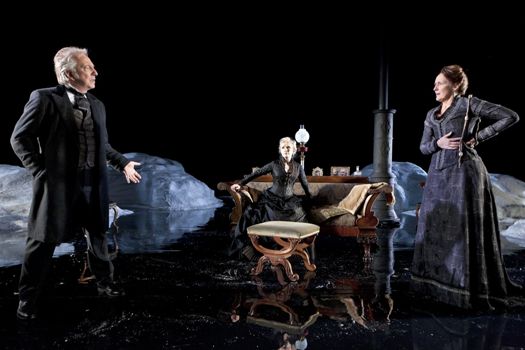 You’ve heard of indoor/outdoor carpeting? Tom Pye’s set for James Macdonald’s production of Ibsen’s “John Gabriel Borkman” at the BAM Harvey Theater features indoor/outdoor snowdrifts. Yes, the chill is thick both outside on the wintry Norwegian fjords and on the inside at Chez Borkman. Gunhild Borkman has frozen her bank-manager husband out of her heart for the last eight years, banishing him to the upstairs apartment after he’s served five years in prison for misappropriating funds, and the furniture in her living room shares floor space with fresh piles of snow that the train of her dress drags around in little swirls.

That’s exactly the kind of play “John Gabriel Borkman” is—a classic drama that flickers rapidly between clear statement and overstatement, deep feeling and melodrama, high theatricality and sheer ridiculousness, symbolism and silliness, family drama and fairy tale. It’s not enough that Gunhild has a sister named Ella, a twin sister, a long-estranged twin sister who had an affair with her husband before he married Gunhild—now she has a terminal illness and has come back hoping to talk her beloved grown-up nephew, Gunhild and John’s son Erhart, into taking her name and keeping her company in her remaining few months. Gunhild will have none of it. She’s banking all her hopes on Erhart to redeem the Borkman family name. Borkman himself descends from his upstairs incarceration to hash out the matter, until all three adults are literally tearing at the young man’s sleeves in a primal family fight. Meanwhile, he is intent on escaping all of them and running off with a rich widow to embrace a happiness his father has never even dreamed possible.

Nothing is subtly stated in Frank McGuinness’s excellent, supremely playable version of Ibsen’s text. “You sold my love to become manager of a bank!” “You killed my joy!” “You had the power to make me happy once—did you use it?” “I’m lonely. I’m dying. Be my child!” “Will you abandon your mother?” No wonder “John Gabriel Borkman” is one of those plays by a great author that one hears about but rarely sees.

Perhaps that’s precisely why Macdonald rose to the challenge of staging it. Macdonald, who has directed fine productions of difficult works by Sarah Kane (“4:46 Psychosis”) and Caryl Churchill (“A Number”), among many others, first mounted the Ibsen play last year at the Abbey Theatre in Dublin. The cast he assembled there and brought over to New York could scarcely be bettered. Alan Rickman’s supreme suaveness and self-humor not only allow him to make sense of the Bernie Madoff-like title character’s arrogance but also manage to render his unapologetic quest for power intriguing. The velvet-voiced Rickman is, of course, famous now to moviegoers from the Harry Potter movies, but he first took Broadway by storm in 1987 playing the lead in “Les Liaisons Dangereuses” opposite Lindsay Duncan. She joins him again here as the beautiful, passionate Ella, who brought tears to my eyes with the ferociousness of her parting wish to Erhart (well-played by Marty Rea): “Live your happy life! Be as happy as you can!” And to the seemingly thankless role of grim, rage-filled Gunhild, the incomparable stage actress Fiona Shaw (also a member of the Harry Potter ensemble) brings a revved-up energy that’s positively riveting, wound tight in her corset, talking a mile a minute. I mean, really, how many actresses could pull off the finale of the first scene, when she declares, “I cannot bear my life!” and faints dead to the floor?

This is a terrific production of an extremely weird play. It’s hard to recommend it wholeheartedly, because it is finally a theatrical curiosity, but I was glad I saw it.