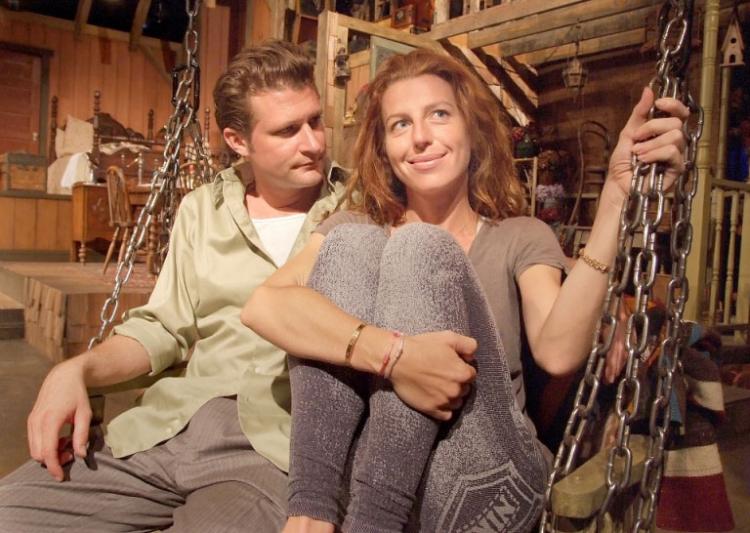 45 minutes, but oh, so far away.  Sadly, Henry Jaglom’s, “Just 45 Minutes From Broadway” does not look like it could travel farther east than Beverly Hills.  No, it is not news:  actors can be very very narcissistic.  Do not bother calling the “New York Times” with that tidbit.

Joel Daavid’s set, however, is a house that should not be wasted.  Warm, worn, and inviting, it is filled with the accretions of a family’s lifetime.  The house too is self-involved, but not in the sense of an interior designer’s self-conscious look-at-me-aren’t-I-chic style.  Rather, there are theatrical posters mixed with family pictures, stacks of books scattered untidily around, and furniture of past un-important eras.  Waiting for the action to start I wanted to meet the family that lived there.  At the end of the two and a half hours I wanted the family to move out and leave their stuff so I could move in; don’t worry about the dirty dishes I can wash them latter.  Not only is it an inviting set, it functions beautifully sketching out living, dining, bedroom, and outdoor space allowing action to flow easily.

You are forgiven if you have trepidations when a critic starts out by waxing poetic about the set so let us move on to the acting.  Jack Heller is the paterfamilias, George Isaacs (lovingly called Grisha in a nod to his, and his parents, origins in Yiddish theatre).  Disheveled, Heller stumbles around seeking his ever increasing fix of Ambien; or impeccably strutting over the slightest adulation – in this case an interview that is to be conducted via Skype for which he is groomed to the nines.  He is the center of his own universe and the center of the universe for everyone else in the house.

Diane Salinger, Grisha’s wife Vivien, is a fading but still beautiful actress.  She glories in memories of having been on the road, all the while using crystals, runes, and the like, to define reality for her.  Salinger has starred in several of Jaglom’s movies and she embodies his prototype earth mother dolling out enough hugs to boost the self-esteem of an entire kindergarten class.  Pandora (Tanna Frederick) is the adored 30 year-old actress daughter coming home to her parents in hysterics after the breakup of yet another relationship.  Also living in the house are brother-in-law Larry (David Proval), a washed up dinner theatre character actor, and Sally, the boarder, (Harriet Schock) another two bit player.

For about two hours we hear them nattering on about past almost greatness or petty domestic stuff such as: Grisha’s carrying on like a two year-old about who had been eating his favorite cookies; Pandora’s adolescent response to her boyfriend’s departure; and how “civilians,” i.e. non-theatre people, just cannot understand them.  It is like floating down a river and finding yourself caught up in an eddy, moving in circles, getting nowhere.  Things do happen in the last few minutes, but I will not go into those twists here so as not to remove the bit of interest one might have.

Bits of wisdom are scattered throughout but they are mostly in the form of quotes such as De Gaulle’s “Old age is a shipwreck.”  We are given  many quotes as that is what passes for thinking in the Isaac house.  These characters see the world as potential drama and we “civilians” as just not getting it.

About the best I can say about the family is that I loved their house, not their life.  A quote (whose source I cannot identify) summed it up:  “Families are tyrannies controlled by the sickest member.”  There was more than one candidate on the Edgemar stage.