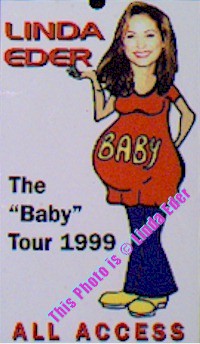 She is a beautiful woman, charming, confident, at ease with herself. She has a singing instrument that is remarkable, with a very wide range, power sufficient to belt out songs in the best Broadway tradition, and breath control capable of making an audience squeal in delight, which, indeed, they did last night at her San Francisco concert debut.

At the moment, she also happens to be seven months pregnant. That Linda Eder, in such a condition, can find the energy to tour with a two hour concert leads us to shrug our shoulders in wonder and attribute the feat to her youth. Backed up by a first class eight piece band led by her long time musical director, Jeremy Roberts, Eder had the audience in her thrall for the evening. (She complained of hunger, not of fatigue.)

In her Atlantic Records publicity it is reported that at age 16, Eder recalls, her "first professional date was the day President Reagan was shot." AMG says Eder was born in 1961 which would have made her 20, not 16, when John W. Hinckley, Jr. went over the edge in 1981. That’s okay. At 38 (which explains the timing of the pregnancy), this gal doesn’t need to worry about the numbers and no one in show biz is honest about age anyway.

In 1987, Eder connected with Frank Wildhorn (now her husband), a song writer who was then involved in the gestation of the musical Jekyll & Hyde. Eder won the role of the hooker Lucy and went on the road with the show in one of the longest pre-Broadway tours on the books – some 35 cities. It actually took a second mounting of the show before it got to New York in 1997 where it has been a commercial success, though the critics pretty much lambasted it. Popular success and critical disdain seem to be Mr. Wildhorn’s fate as his subsequent shows, The Scarlet Pimpernel and this season’s The Civil War, seem to do good business in spite of the reviews. (Wildhorn must be crying all the way to the bank.)

Now all this is relevant here because a big part of Eder’s concert is devoted to her husband’s songs. She opens with an upbeat Welcome to Paradise, which is from Wildhorn’s new work in progress, Havana, a vehicle for Eder expected on Broadway next year. It’s a song that works, using a nice swingy Latin beat to evoke that once sizzling city in its heyday.

Two ballads followed, Is This Anyway To Fall In Love, which is on her 1994 album, and I’m Afraid This Must Be Love from her most recent release, It’s Time. Both pleasant love songs, nicely sung, songs that could have been written fifty years ago. I liked another slow ballad, The Reason People Fall in Love. In My Dreams, in fast three-quarter time, was a nice upbeat change of pace. I Don’t Know How to Say Goodbye is yet another affecting ballad, a song of bereavement. Last Tango, from the It’s Time album is catchy, but annoying, ’cause the rhythm ain’t a tango at all. (Am I the only one bothered by such things?)

Now, it has often been said that Ms. Eder is a Barbra Streisand sound-alike. Hey, if ya gotta sound like someone, that’s not a bad way to go. On the other hand, in In Vienna, Eder sounded a whole lot like Jane Olivor and in her Man of La Mancha number, the Shirley Bassey sound was evident.

Linda Eder is loaded with talent, charm, and charisma, but if we keep hearing other singers in her voice and in her stylings, when is Eder going to emerge in her own right? She needs to carve out a style of her own. Part of the solution has to be in a wider choice of materials to sing. Eder’s loyalty to Wildhorn’s work is admirable, but no singing artist of Eder’s gifts should limit herself to a narrow range of materials. Wildhorn does have a flair for a theatrical sound, but, by any standard, he works a narrow pop range. When Eder sang Sondheim’s Children Will Listen last night, a whole different level of listening emerged. She handles a lyric with intelligence and it would be a big plus if she found more songs that went beyond the cliched love lyrics of the past.

Eder’s devoted fans gave her two standing ovations in San Francisco. Let’s hope that kind of adoration doesn’t blind her to the still untapped depths of her talent. An artist must never stop growing.