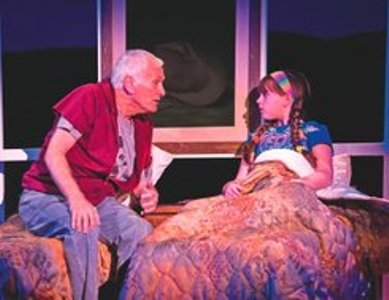 In the ever popular forum “iconic movie turned musical,” here comes “Little Miss Sunshine.” This La Jolla Playhouse world premiere is based on the 2006 Oscar-winning motion picture of the same name (screenplay by Michael Arndt). It follows the Hoover family on a road trip from Albuquerque, N.M., to Redondo Beach, Calif., where 10-year-old daughter Olive will compete in a children’s beauty pageant. What makes the trip adventurous is the mix of characters and circumstances all packed up in a moody VW bus.

Richard Hoover, the father, is a motivational speaker who believes the “Ten Steps For Success” program he developed will help everyone and bring him fame. His wife, Sheryl, has a hard time envisioning the promised brighter days ahead. She is more concerned with getting everyone through the day and is starting to get burned out by the same old routines. She juggles her professional life at the bank with raising her two kids. Challenges arise when her brother Frank comes to live with them. Frank is a Proust scholar who recently made an attempt to take his own life after a failed relationship. Because of his fragile state of mind, he cannot be alone. Another addition to the family is Grandpa (Richard’s father), who was kicked out of the Sunset Village retirement community for misbehaving. Grandpa has lived a full life and doesn’t intend on wasting another minute refraining from saying exactly how he feels about things. This makes for some colorful language and attitudes on his part. He is also very close to Olive and acts as her pageant coach. Dwayne is the family teenager who struggles to fit in. His dream is to become a test pilot and until then, he has made a vow of silence. Little Olive is an average bubbly kid. Unlike the rest of her family, she seems spared by life’s turmoil. She learns that, due to a disqualification, she is eligible to participate in the regional Little Miss Sunshine beauty pageant in California. The Hoovers must go.

In the role of Richard Hoover is actor Hunter Foster (“Urinetown,” “Little Shop of Horrors”), while Jennifer Laura Thompson (“Urinetown,” “Wicked”) plays his wife, Sheryl. The two actors make a great pair and convey a multidimensional relationship, struggling through the lows and growing through the highs, all the while making the audience laugh and cry. Malcolm Gets (“Caroline in the City,” “A New Brain,” “Amour”) is an appropriately morose Frank. He shines most in the number “How Have I Been?” with talented ensemble members Bradley Dean as Larry and Andrew Samonsky as Joshua. Dick Latessa (“Hairspray”) is Grandpa, the quintessential elderly man going through a teenage crisis, if there is such a thing. Yet, Latessa manages to also bring out the soft poignant side of Grandpa in the wonderful number “The Most Beautiful Girl in the World.” His portrayal of the character is both gutsy and touching. The role of silent Dwayne Hoover is terrifically played by Taylor Trensch, and Georgi James makes a great Olive.

The ensemble has been given a special task in this musical version. In the opening number “Ten Steps for Success,” they come in around Richard Hoover to sell the self-help concept to an Albuquerque Spring Fair audience and encourage all to “leave looserhood.” As in the early Rogers and Hammerstein musical “Allegro,” they come back throughout the play as a Greek chorus to punctuate the different emotional stages of the Hoover family. Their detachment from the emotive state of the characters is an interesting view point, but the audience might find it distracting from the action. Numbers where the main characters are honestly sharing their struggles and experiences make a much stronger point. That said, members of the ensemble (Carmen Ruby Floyd, Eliseo Roman, Sally Wilfert, Zakiya Young, Bradley Dean and Andrew Samonsky) absolutely stand out in their individual parts. These actors are amazing chameleons and through many, mostly fast, costume and make-up changes (costume design by Jennifer Caprio, hair and make-up design by Dave Bova), they become the memorable citizens of “Little Miss Sunshine”: a passive-aggressive nurse, a voluptuous hooker, a passionate lover, a rival scholar, an Indian store keeper, a satirical Miss California, an eccentric pageant registry person and a hilarious Hispanic pageant host. Other fun additions to the cast are beautiful pageant girls Felicity Bryant, Sophia DeLange, Madi Rae DiPietro and Kishka Grantz.

Another shiny part in this production is the set, designed by David Korins. It is ingenious in its simple looks. Minimal skeletal structures fly or slide in and out to become homes or hospital buildings. The infamous yellow VW bus goes from miniature to full size depending on the perspectives. As the trip progresses, the cartoon-like horizon lines are accented with floating cotton clouds slowly drifting by or sprinkled with hilltop nightlights. It is all visual candy!

Tony Award-winning team James Lapine (book and direction) and William Finn (music and lyrics) have partnered once more (“Falsettos,” “The 25th Annual Putnam County Spelling Bee“) to bring us this stage adaptation. They, too, have started an exciting voyage (a couple of years ago) and it will be interesting to follow “Little Miss Sunshine”’s creative journey henceforth.