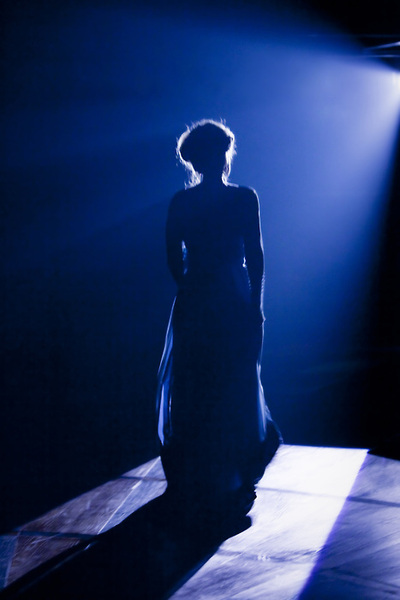 In a new version by Zinnie Harris

This is a compelling new production of Ibsen’s seminal 1879 drama about the inequality of women in marriage. Gillian Anderson, leading a uniformly excellent cast, gives a scorching performance as Nora, the play’s heroine.  Zinnie Harris’ new version moves the action on by 30 years to 1909 and transfers it from a small stuffy town in Norway to Edwardian London and Nora’s husband, Torvald Helmer, a newly promoted bank manager is transformed into Thomas Vaughan a newly appointed British Cabinet Minister. Whilst effectively streamlining and lightening the dialogue and thereby increasing the dramatic tension in the play, this new version also underlines the chauvinistic patronizing attitudes of the day and the powerlessness of women in a man’s world (and in marriage). By moving the play into the political sphere, Zinnie Harris also ups the dramatic stakes and in the current climate of political financial scandals in the UK, the lines are all the more relevant (and entertaining) to audiences. Indeed Kfir Yefet’s direction does bring out the sardonic and ironic humour in the new text and Vaughan’s patronizing comments did bring gasps of disbelief and even laughter from the audience.

The political scandal in the play arises from Nora herself, who in order to save her husband from a nervous breakdown caused by ill health, has secretly borrowed money from his disgraced political rival, Neil Kelman. Kelman now threatens to expose her unless she can persuade her husband to assist Kelman’s reinstatement as an M.P. As Nora, Gillian Anderson wrenches every possible moment of emotional tension from the action. She is like a wounded animal desperately trying the escape her hunters, trapped within Anthony Ward’s claustrophic set, with its huge bookcases towering over her. The panic in her eyes grips the audience too and belies her elegant Edwardian society hostess demeanor. Miss Anderson’s achievement lies in her ability to convincingly portray Nora’s transition from being a victim to having the strength to walk out. This she does by making Nora initially more assertive and mature than previous passive and childlike portrayals of the role. Also underlying everything, we never doubt her deep love for her husband and her children.

Similarly, Tara Fitzgerald, as Nora’s old school friend Christine finds a passionate nature in the hardworking poor widow, which can too often be a dreary and carping role. Her intense desire for her old flame Kelman and her determination to reclaim him are deeply affecting as is their passionate reunion. Chistopher Eccleston’s menacing blackmailer Kelman is hugely effective and his scenes with Nora are electric. His taunts are not merely threatening but arise from a bitterness and despair at being trapped in a political scandal he cannot get out of. He is desperate to be re-instated because of his two young sons, therefore making his course of action understandable. He also conveys the loneliness of the widower and his reignited passion for Christine and subsequent restored humanity (another tricky transition) are vividly believable in his hands.

As the friend of the family, Dr. Rank, Anton Lesser effectively conveys the loner who is made to feel part of but is always outside the family. His infatuation for Nora is deftly suggested from the start and, as a doctor with a terminal illness, he has an ironic detachment from the intense turmoil which surrounds him and is therefore able to effectively comment upon it. There is a tangible sense of his impending doom – he has the air of someone who is not going to be with us for much longer. Toby Stephens plays the Edwardian politician very well indeed. One might almost say too well. There is a voluptuousness about him that makes one wonder if he might not have a mistress hidden away somewhere (which would create an interesting twist to the plot). But his selfish and intense political ambition is keenly observed. Similarly he also plays the patronizing Edwardian husband very well and his treatment of Nora in the final scene is shocking but almost teeters into melodrama. The sadness is that the role appears to be very much the upper class boor and there are times when it verges on caricature or something from a period drama on television.

Whereas in Ibsen’s original, Torvald Helmer, is not obsessed with ambition but with money and respectability. He has an intense fear of getting into debt. Hence his horror at Nora’s loan. By contrast, one can imagine Thomas Vaughan running up bills at his club without any qualms. Helmer is not a heavy-handed boor but a mild mannered but narrow-minded husband who has to be in control. Ibsen’s theme is partly small town respectability and how wives have to sacrifice themselves to maintain it.      Zinny Harris’ new version does make for compelling drama and is well crafted and wonderfully acted by this cast. It does not purport to be a translation of Ibsen’s original. But the re-working is so far removed from the original that it is almost another play. Ibsen’s message about the powerlessness of women, particularly in marriage, come across very clearly and remains refreshingly thought-provoking. But the new version’s political milieu goes against Ibsen’s intention of dissecting a respectable middle class marriage. It is more in line with the plays of Harley Granville Barker or John Galsworthy who followed Ibsen’s lead in the British theatre in the Edwardian era.

For all that: do not miss this superlative cast!