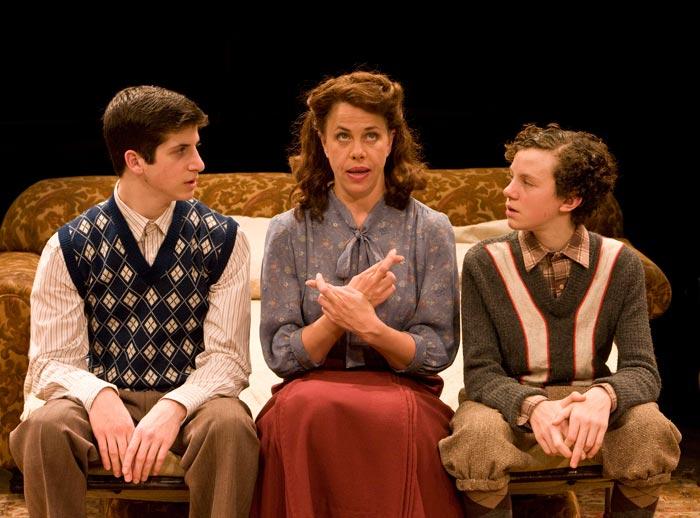 Set in the early days of World War II, Neil Simon’s Pulitzer and Tony-winning Lost in Yonkers begins with two adolescent boys, Jay and Arty, lamenting the heat, their clothes, and being stuck in Grandma’s apartment. But mostly they talk about their eccentric relatives. There is Aunt Bella, a few cards short of a deck; Aunt Gert, who has trouble coordinating her talking with her breathing; Uncle Louie, the gangster; and of course Grandma, who is feared and loathed by all of the above.

Jay and Arty soon find that their stoic father, Eddie, is indebted to loan sharks and must take a job selling scrap metal in the South to pay them back. With dad on the road, they must spend the next few months living in that apartment with Grandma and Bella—in their eyes a fate worse then death.

The play begins as a typical Neil Simon comedy but gradually morphs into more serious drama, as each of the adults unwinds their relationship with Grandma and the boys do their best to navigate this treacherous terrain. Grandma, a German immigrant, is played with Prussian menace (think Colonel von Scherbach from Stalag 17) by Tony winner Judy Kaye. Even Uncle Louie, who claims he is beyond her reach, sits down when Grandma commands.

Jay and Arty are amiably confused throughout, especially when Bella confides that she has a secret love. Played frenetically by Jennifer Regan, Bella is bewildered, well-meaning and the only one who really knows how to stand up to Grandma.

Lost in Yonkers is the Globe’s inaugural production in Sheryl and Harvey White Theatre. There is not a bad a seat in the house. The direction is brisk and the sets evoke depression-era modesty. All in all, it’s a fun show and a bit meatier than you would expect from Simon.