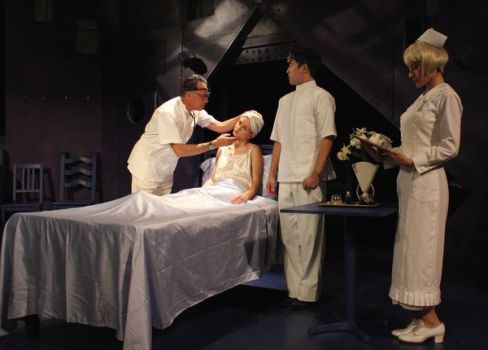 Before there was Casey Anthony, before O.J. Simpson, before John Wayne Gacy, before Aileen Wuornos, there was Ruth Snyder.

Her 1927 trial, for killing her husband, was called “the crime of the century,” a claim that proved a bit presumptive and premature in light of subsequent murders.* It occurred, though, at a tumultuous time in America: women had gained the right to vote only seven years earlier and were striving to gain other forms of equality, but it was a struggle.

However much the “The Flapper” may have been celebrated as the symbol of the new 20th century woman, 19th century mores were still extant. Smoking cigarettes, drinking bathtub gin and dancing the Charleston might make a young woman the “cat’s pajamas” on a Saturday night in the 1920s, but come Sunday morning she risked being described as a “floozy.”

Prohibition was still in force and real-life Elmer Gantrys roared about the decline of American morality back then. And any crime that featured an attractive woman, adultery and murder was the juiciest of juicy red meat for the newspapers of that era. Snyder was perfect for those times: she was a young, attractive woman involved in an extra-marital affair with an also-married corset salesman, Judd Gray. This combustible mix eventually exploded and lead to their murdering Ruth’s husband, Albert Snyder.

While not a literal reconstruction, “Machinal” parallels the major figures and elements of that crime: an overbearing businessman; a shy, pretty young woman in his firm’s secretarial pool whom he brow-beats into marriage; and a young man who maybe, maybe not, loves her but in any event engages her in an adulterous relationship. It all culminates, of course, in the husband’s murder.

To Sophie Treadwell, the “Machinal” playwright and a protofeminist, this is almost to be expected, given the pressures imposed on women generally and, specifically, the young woman at the center of this play. Treadwell’s stage directions are clear, unambiguous: “Tell this story by showing the different phases of life that the woman comes in contact with, and in none of which she finds any place, any peace. The woman is essentially soft, tender, and the life around her is essentially, hard, mechanized.”

Director Barbara Schofield follows Treadwell’s guidance to a T; all 15 cast members make their characters credible. George H. Jones (Arthur Hanket) is a go-get-’em, supremely self-confident executive of the type that Sinclair Lewis skewered in the novel “Babbitt.” Helen (Charlotte Chanler), a lovely, wistful female, persuasively conveys the young woman’s powerlessness and longing to be more than just another spare part in life’s machinery. She doesn’t want to work for Jones; she doesn’t want to be married to Jones – but she has little or no choice. Helen’s loathing for the man comes across clearly when, on their honeymoon, she desperately parries — at least delays — his lunges to undress her and have at her.

As the “Young Man” who succeeds where Jones cannot, Dylan Meddalena is smooth. He excites Helen with his tales of bar-room brawls and having killed a man with a pebble-filled beer bottle down in Mexico. According to the supposed Chekhovian adage that a gun shown in the first act must be fired by the third, you know you’re going to see a pebble-filled bottle later on. And you do.

Treadwell ties “Machinal” together as nine episodes that, aside from a brief intermission, follow one another like links in a chain. It is telling that, in Episode No. 8, where Helen and Young Man are on trial for Jones’s murder, the defense lawyer (Elizabeth Greer) and the prosecutor (Kevin McCorkle) spar with each other like robots and the judge (Bill Jackson) consistently overrules the defense while sustaining the prosecution. Justice may supposedly be blind, Treadwell implies, but it often proceeds mechanically.

Scenic Designer Jim Spencer conjours up the sights, and Sound Designer Peter Carlstedt the sounds, of a ’20s office, a home, a hotel, a maternity ward, a speakeasy, a courtroom and the Sing Sing Prison execution chamber (Episode No. 9) by sleight-of-hand furniture shifting. Costumer Shon LeBlanc dresses the men and women nattily and Joe DiMaggio (no, not that Joe DiMaggio; this Joe DiMaggio) places a marvelous, marcelled blond wig on Chanler. The overall effect is akin to watching a Turner Classic Movie.