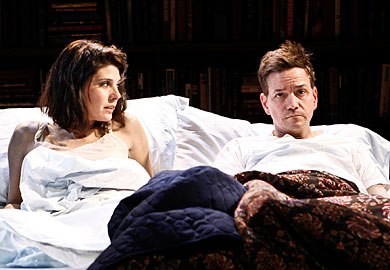 By Wallace Shawn
Directed by Scott Elliott
The New Group, New York
Through May 7, 2011

Although much better known as a distinctive character actor, Wallace Shawn is one of the best American playwrights of our time. His plays are highly original—intense, hilarious, and disturbing all at once—and anything but crowd-pleasing, which is why they’re not better known. For hardcore fans of smart, challenging theater, Shawn is a hero, but it’s also extraordinary to sit in the theater and feel big swatches of the audience responding with active hatred. His biggest champion in the New York theater these days is Scott Elliott, the excellent stage director who runs his own company called The New Group, which has produced four of Shawn’s works, all to a mixture of critical acclaim and audience loathing.

The latest is “Marie and Bruce,” a play that Shawn wrote in 1978, premiered in London in 1979, and then opened in New York in 1980. That production at the Public Theater famously featured in the title roles Louise Lasser (fresh from her legendary TV series “Mary Hartman, Mary Hartman”) and Bob Balaban. Nobody who saw it will forget the hilarity and sadness of this Strindbergian portrait of a marriage that has reached the point where love and hate have become indistinguishable, when “you worthless piece of shit” means “darling” and vice versa. Many actors and directors have claimed they wanted to do the play, but over the years very few have had the guts. An imaginative and faithful movie version was made in 2004 by director Tom Cairns starring Julianne Moore and Matthew Broderick. That it was never shown in movie theaters but was released only on DVD may give you a hint as to how deeply weird and ultimately unpleasant the movie is.

The story tracks one ordinary day in the couple’s life as they wake, have coffee, wander around during the day, attend a dinner party, go for coffee afterwards, and wind up at home again. As I wrote in a 1983 profile of Shawn for Esquire, “His plays never have elaborate plots surveying global events; they usually have to do with life as it is lived in the body, this very minute. His characters are always getting sick, throwing up, eating, or weeping, in the throes of sexual mania or undergoing huge emotional mood swings. Most of his plays, none of which lasts much longer than an hour, observe an elegant, day-to-night unity. The final scenes usually portray a man and a woman, still together despite all the upheavals that can occur in a day, or a life. And the last moment of the play will be like the last moment before one day becomes another, a moment filled with terror and inevitability: you’re either sleeping or awake, alive or dead. … Wally Shawn has appointed himself the secretary of the interior, cataloging the cold-sweat nightmares that lurk behind the placid face of everyday life.”

Elliott does a great job with Shawn’s works. He’s unafraid of their darkness, yet he’s a real showman who knows how to follow every mercurial shift of the plays and fill each moment with theatrical juice. With one exception, everything about his production of “Marie and Bruce,” which stars Marisa Tomei and Frank Whaley, is terrific. He starts the show with the couple in bed, center stage, as the audience trickles in, Bruce sleeping, Marie smoking, fidgeting, and fuming. In the long scene that opens the play, Marie announces to the audience that she hates Bruce and intends to leave him. When he’s awake, she piles torrents of verbal abuse on him (“Goddamned worthless piece of filthy shit, you idiot, you asshole, you God damned filthy idiot cock-sucking turd!”), to which he responds with a mild-mannered non-defensiveness that speaks volumes about the state of their marriage. Elliott keeps the marital bed in place as the two characters go their separate ways: Bruce to lunch with a friend followed by a decision to rent a hotel room to masturbate while watching a half-naked woman in the window across the street, Marie to wander into a park where she dozes on the grass and has a vaguely erotic encounter with a dog.

The dinner party becomes a bravura piece of staging. Elliott choreographs the scene change as a musical number (to Blondie’s “Rapture”), and in place of the bed there’s a big round dinner table on a revolve, so throughout the long elliptical party scene we catch snatches of increasingly drunken and disjointed conversation as various couples and trios spin by. The dinner party dissolves into a café setting, where another of the play’s most notorious scenes takes place (the couple overhear two men at an adjacent table talking loudly and explicitly about an episode of intestinal distress). And only the lighting cues take them home, winding down to Marie in a surprisingly poignant Beckettian spotlight.

Unfortunately, the exception to the play’s successful elements is a huge one. Tomei is terrible as Marie. Simply terrible. When she’s not speaking, she inhabits the staging that Elliott has created for her beautifully. But as soon as she opens her mouth, all is lost. She has no depth and no ability to navigate the conflicted feelings raging through the character. It’s like watching Meg Ryan try to play Hedda Gabler. (To be fair, not everyone feels this way. Ben Brantley in the New York Times seemed to think she was just fine.) Admittedly, Marie is a toweringly challenging role—how do you balance the savagery of the language with the loneliness and vulnerability underneath, without turning vulgar or sentimental? It requires a really special actress (Laurie Metcalf? Catherine Keener? Jan Maxwell?), but Tomei is not her. It’s too bad because Whaley gives a very fine nuanced performance in an equally difficult and subtle role. He’s strong enough to hold his own and maintain the character’s passive-aggressive blitheness even when the audience squirms at the rawness of his language about body functions. Under Elliott’s direction, it becomes clear that Bruce drinks non-stop, which goes a long way toward explaining his behavior. The supporting cast and all the design elements are outstanding (set by Derek McLane, costumes by Jeff Mahshie, lighting by Jason Lyons), all of which makes me wish that a better actress had played Marie.