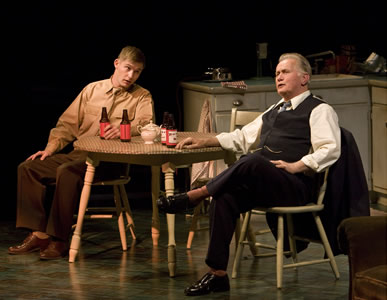 The Subject Was Roses

It is strange.  “The Subject Was Roses” strikes me as being dated.  But why?  The themes are as relevant today as they have ever been:  husband and wife who probably should never have married but will stick together to the bitter battling end; son caught in the middle trying to form separate alliances with each and keep the family intact; parents caught between seeing their son as a child one minute and as a man the next.  How well I remember the surprise when my son came home from college.  Somehow, in my mind, I expected the cheek I would kiss when he got off the plane would be a smooth little boy’s cheek, and the scratchy man came as a shock.  I had not adequately readjusted the clock in my mind to the reality that he had grown up years before.

“The Subject Was Roses” debuted  in 1964, but takes place in 1946, in a modest apartment in the Bronx.  That alone does not make it dated.  After all, audiences still flock to see Shakespeare despite the works being centuries old.  World War II has ended and Timmy Cleary (Brian Geraghty) has just returned from three years in the army.  With a welcome home banner stretched on the living room wall, it is the morning after his return to a beer soaked celebration.  His blustering father, John Cleary (Martin Sheen), who more than kept pace with the beer consumption the night before, but is doing much better this morning than his son, is engaged in a scrapping dialogue in the kitchen with Nettie Cleary (Frances Conroy) his wife and Timmy’s mother.  The subjects of their bickering are just the current chapter in what you sense plays more like the war of the roses, than rose scented domestic bliss:   Who loves  their son more? whom does he love more? and more important, who is in control here?

Martin Sheen is a pleasure to watch as the blustering, hard drinking, self-made man cum control freak.   When “War of The Roses” opened on Broadway, Sheen premiered the role of the son.  He played Timmy again in the movie.  It is poetic that he now, 46 years later, plays the father.  In an interview about the original production Sheen discusses a problem he had playing the son accusing the father of never saying “I love you” to him.  He told his director then, “Boys don’t tell their fathers they love them.  That’s not done.”  The director asked him, “have you ever told your father you loved him?” It came as a shock to Sheen.  He answered, “No, I hadn’t.”  The director responded, “Neither did I.  And neither did Frank Gilroy.  That is why he wrote the play.”  It was the key to Sheen’s understanding of the play.  As the father in the Taper revival, he taps into that feeling.  He chokes, barely getting the words out, when his son demands it of him.  Touching as the scene is, I am not clear that is the core of the play.  It also strikes me that the very phrase, “I love you,” is now uttered so indiscriminately in some circles as to become meaningless.

Then again, the subject is not roses either.  As we all know, in relationships something trivial can become laden with meaning.  Complaints about how the toothpaste has been squeezed are not really about toothpaste, and the roses that Timmy has bought for his mother, then tries to get her to believe have come from his father, are symbolic of the lies and disappointments his parent’s marriage is fraught with and the lengths he has always gone to in order to keep the family together.  We get it, but the roses are a weak symbol.  When Nettie Cleary smashes the vase with the flowers we are not gripped with emotion.

As much fun as it is to watch Martin Sheen, Frances Conroy is a disappointment.  She plays the trapped, ultra repressed, pre-women’s lib housewife, over involved with her son to compensate for the emotionally absent father and silently aware that life is passing her by.  This is not so far from the part she played spectacularly well on “Six Feet Under.”  In the Taper production, however, all this is ineffectively conveyed in a high pitched, tiny voice.  Her HBO character was very similar but much more convincingly played.  It is as if director, Neil Pepe, wanted to bring even more attention to Sheen’s powerful performance.  No need; I think he could have held his own and would have been all the stronger if her part were more convincingly portrayed.

Maybe the issue is not so much that “The Subject was Roses” is dated, though it sure felt that way, but that it was not all that well written, Tonys and Oscars notwithstanding.  If you go, you will remember Martin Sheen’s powerful performance, but there is a good chance that is just about all you be able to recall.