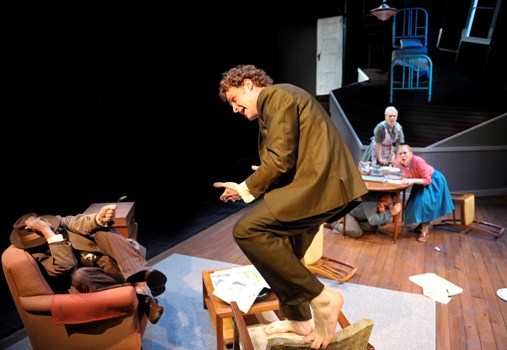 Gregor Samsa (Alexander Crowther, standing on chair) confronts his boss (in armchair) and
his family members (at table) in “Metamorphosis”
Photo by David Allen

Get out the bug spray! There’s more than one wall-crawler onstage right now. While New York’s “Spider Man: Turn Off the Dark” may be getting more publicity, a new adaptation of Franz Kafka’s “Metamorphosis” at the tiny Aurora Theatre in Berkeley may be just as satisfying, nearly as athletic and certainly less accident prone. No singing, though, and just a little bit of dance.

Kafka’s creepy tale of man-turned-insect, written in 1915, has been dramatized by British director David Farr and Icelandic actor-director Gísli Örn Gardarsson and was well received in the West End, Dublin, Australia and Hong Kong. This is the first professional production on the West Coast. While Kafka set the story in his own time, Farr and Gardarsson moved it up a few decades to a pre-WWII regime. Aurora director-playwright Mark Jackson has bumped it up even further, to the conformist 1950s and moved the location to the America of perfect homemakers and keeping up appearances. That mostly works until a prospective boarder (Patrick Jones) shows up with a slight German accent and warnings about people who would be watched. Then we seem to be right back in Europe of the late 30s.

Wherever and whenever it takes place, the tale is timeless. In case you’ve forgotten, Gregor Samsa (Alexander Crowther), a rather ordinary traveling salesman, wakes up one morning to find himself transformed into a giant cockroach. At first we see him mostly through the eyes of his horrified family: Mother (Madeline H.D. Brown), Father (Allen McKelvey) and young sister Grete (Megan Trout). They come in for breakfast with Mary Tyler Moore smiles pasted on their faces, take one look at Gregor and begin screaming like folks in a horror film (which is part of the intentional fun). Only Grete has the guts—and the compassion—to try and connect with this thing that once was her brother, but even then only up to a point.

As time goes by and everybody has to go to work (Gregor has been the sole support of the family for the past five years), the insect gets less and less attention and, on some days, less and less food. Father is full of himself, strutting around in the uniform he wears as a bank guard. Mother takes in sewing and Grete, once a hopeful ballerina, is finding out how the real world works behind a department store counter. The smiles are still pasted on their faces but they are getting a little worn. A prospective boarder (a very funny Jones) may be the ticket out of their financial bind and perhaps even an acceptable suitor for Grete but guess who ruins that little plan.

As for Gregor, locked in his room he swings across the walls of Nina Ball’s inventive set which places his bedroom on a sharply raked platform above the family’s living room. We see the family’s pathetic attempts at normality at the same time we witness Gregor’s agonized isolation. Crowther is especially adept at climbing the bars on the walls and scuttling under the bed when he has to hide himself from view. He is just as good at portraying the pain of the outsider and the vulnerability of the dependent. For all its cartoon-like humor, this is a tragedy after all. And it ends tragically—or perhaps hopefully as the first flowers of spring push through the floorboards of Gregor’s prison/bedroom. With Kafka you can never be sure. Don’t look for answers. The questions are quite interesting enough.