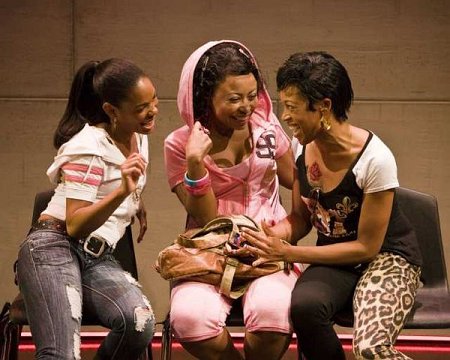 For her new play “Milk Like Sugar,” co-commissioned by La Jolla Playhouse and Theater Masters from Aspen, Colo., playwright Kirsten Greenidge found inspiration in a 2008 news story from Gloucester, Mass., where sophomore girls allegedly entered a pregnancy pact, hence contributing to a teen pregnancy record at Gloucester High School that year (17 altogether). The event launched a fierce debate that shook all pillars of our society: education, religion, parenting and socio-economic classes. Greenidge chose to imagine a group of girls from a different background, closer to that of her public-speaking students from the Boston area, and placed it center stage. “Milk Like Sugar” follows Annie, Talisha and Margie as they promise each other an eternal bond through childbearing in an attempt to escape the great pushes and pulls inflicted by life’s forces.

Angela Lewis leads the cast as “Sweet Sixteen” Annie. The teenage girl’s gift to herself (since her mom forgot her birthday) is an unauthorized tattoo. She is accompanied by her two best friends: Talisha (Cherise Boothe), who dates an older boy and passes for a tough, pushy girl, and bubbly, color-coordinated Margie (Nikiya Mathis), who is already pregnant and far gone into the fantasy of material comfort her baby will enjoy, beautiful pink strollers and all. Through their conversation, we soon have a glimpse into their crooked world and find out that their life is sort of a big trial. They are judged every minute of the day for what they say and what they like, for what they do or don’t do, for what they wear and even for the phones they can afford. … They need something of their own, someone who can love them for who they are truly, who will not judge them, someone they can protect from all this madness. Why not a baby! The pact is born.

The trio of main actors produces great performances. The rest of the talented cast consists of Tony Award winner Tonya Pinkins as Annie’s challenged mother, Myrna, and J. Mallory-McCree as young Malik. The role of Antwoine, a tattoo-artist-in-training, is played by LeRoy McClain. A notable and surprising performance was that of Adrienne C. Moore as nerdy Christian girl Keera. She paints an authentic portrait of this offbeat character.

Rebecca Taichman, who most recently directed “Sleeping Beauty Wakes,” also at La Jolla Playhouse, helms the production. The simple set is designed by Mimi Lien. It consists of a few movable pieces that suggest a tattoo parlor, a humble kitchen or a school hallway, and a massive brick wall that stretches almost the entire width of the Potiker Theatre stage. Between scenes, the wall moves forward, seemingly squeezing the characters closer to the audience so we can take a closer look at their fantastic life, or backward, giving those confused souls more space to breathe in a fresh, full gulp of illusions. Distorted sound bits (composition and sound design by Andre Pluess) and surreal lights (designed by Justin Townsend) effectively accompany the movements of the wall during set changes to make for smooth transitions. Costumes (Toni-Leslie James) befit all characters and suit all occasions.

In the end, while “Milk Like Sugar” (an explanation of the unusual title is provided by one of the characters) deals with a rather heavy subject, it is still sprinkled with humor, plenty of vitality and moments of hope, which provides a nice balance for the viewers. It is an important work that needs to be seen and discussed for the sake of our children and their future.