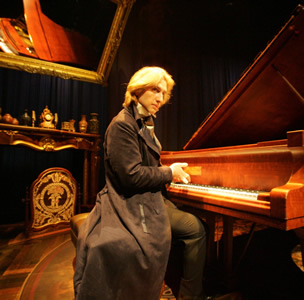 Hershey Felder has a shtick … a pretty impressive shtick, mind you, but a shtick nonetheless. He takes on the persona of a well-known composer and tells his story performing the composer’s music throughout. Writer, actor, pianist, vocalist … he does everything but stage the performance himself. Few could pull it off with such polish and the product is entertaining; there is no denying that.

Felder has written a trilogy of one-man shows about three composers, Gershwin (seen earlier this year at the Geffen), Chopin (currently on the Geffen stage), and Beethoven (to debut next year in San Diego). He envisions the trilogy as a “sonata.” The first two are the kinds of performances you can take anyone to, even your aunt from Duluth whose taste runs to country western. Gershwin and Chopin were brash young men who died at about Felder’s current age (39) and whom he plays with self-centered bravado. Their music is universally engaging. Felder’s wit and aura of precocity seem genuine and suits these two characters just fine. It remains to be seen if he can fit into the personality of grumpy Beethoven as well. At some point precocity gets old.

Monsieur Chopin is structured as a piano lesson, a device that seems to contribute as little meaning as the gilded frame around the stage. Felder speaks autobiographically. He begins with Chopin’s first published sonata at age 7. He talks about his (Chopin’s) love for his native Poland; his hate for the Russian occupiers; he demonstrates how Polish themes and rhythms give shape to the Mazurka and Polonaise; and how the tragedy of his younger sister’s sudden death gave rise to the familiar Marche Fúnebre.

Though Poland remained the foundation of his work and identity, it was in Paris that Chopin flourished. Felder explains the salon life of the musician and is most engaging in his gossipy explanation of salon society. The highlight of Monsieur Chopin is La Grand Valse Brilliante. Felder was at his most charming demonstrating the various themes battling within the piece: the Baron, host, with his baritone laugh; the wife and the other tittering, gossiping women; the constant stream of carriages ferrying the glittering guests; etc. He then brought it all together playing the Valse with style and bravado. The effect was delightful.

In Gershwin Himself, Felder returned after what seemed to be his final bow to lead a sing-along of Gershwin’s familiar songs and banter with the audience. After the seemingly final bow of M. Chopin, Felder was back on stage in a flash requesting the audience to ask questions “about anything” and he would answer them as Chopin. The device in Gershwin seemed a bit hokey, but harmless; in Chopin it felt forced and unnecessary. In a rock concert goodbye is never goodbye, it is just the beginning of the encore section. Recently Los Angeles audiences of theater and classical music seem to have adopted the compulsive habit of leaping to a standing ovation which has diminished its meaning. Let us hope Felder’s coda is not the beginning of a trend.

It is hard to imagine a student of classical piano who has not played and loved Chopin. It was a delight to hear so many of his works together in one evening, though some were played better than others. As Chopin, Felder gossiped about the “pounding” habits of other salon performers, especially his rival Liszt; on the night of this review some of Chopin’s earlier pieces suffered from the same treatment at Felder’s hand.

In the end, Felder gives the sense of doing too many tricks: ‘Look, I can play. Look, I can act. I can sing.’ But why not stick with and polish his greatest strength, the piano. Is Chopin lite really better than Chopin up neat? Finally, it is in the eye of the beholder and most of the audience seemed well entertained.

speaks autobiographically. He begins with Chopin’s first published sonata at