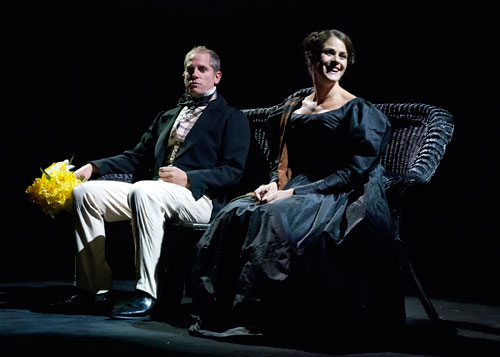 ‘Much Ado About Nothing’

There’s a scene in “Much Ado About Nothing” in which Benedick (Jonno Roberts) attempts to compose a love poem to Beatrice (Georgia Hatzis). As he puts pen to paper, he seems surprised, both by the difficulty of the task and the emotions that inspired it. His soliloquy is both amusing and touching—a moment of self-discovery.

The Old Globe’s production of “Much Ado” is full of moments like this, with stunning results. Sometimes the dialogue seems too contemporary to have been written by Shakespeare, and yet a quick search finds otherwise. Much of the credit goes to Ron Daniels’ thoughtful direction, which strategically lingers on key moments, exposing both the lighter and darker aspects of the comedy.

The play revolves around two couples. Claudio (Kevin Alan Daniels) and Hero (Winslow Corbett) along with Benedick and Beatrice. Soldiers in Don Pedro’s (Donald Carrier’s) army, Claudio and Benedick have just returned from victorious battle and have set their minds to softer pursuits. While the romantic Claudio is eager to find a bride, the cynical Benedick is just as eager to avoid marriage. Claudio finds his love in Hero, while Benedick engages in verbal jousting (foreplay?) with Beatrice.

As the story continues, various conspirators play tricks on these couples to either lure them into, or toss them out of love. Don Pedro’s nefarious brother Don John (Jay Whittaker) devises a plot to undermine Claudio’s perception of Hero’s virtue. On the other end of the spectrum, Don John and Claudio contrive love between Benedick and Beatrice. In each case, hearsay instantly becomes fact.

Roberts and Hatzis, real-life husband and wife, steal the show with their cheeky word play and surprise discovery that they may actually be in love. Benedick’s rapid evolution from unrepentant bachelor to besotted suitor is admirably turned, with the occasional sly wink to the audience.

Other standouts include Adrian Sparks as Leonato, Hero’s father, and Whittaker, as the dark and cowardly Don John. In addition, John Cariani is pure genius as the constable Dogberry, maximizing the comic effect of every syllable.

The Globe’s characteristically simple staging is used to good effect and the 19th-century wardrobes are nicely done. That the bad guys wear black seems a little much, but that can only be called a quibble. The music is excellent and adds to the overall mood of the comedy. Nicely done, all around.