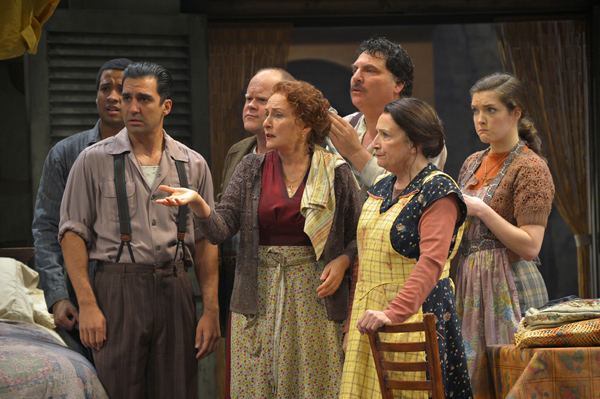 “Napoli!,” a robust entertaining World War II comedy/drama by the great Italian playwright Eduardo De Filippo (1900-1984), revolves around the boisterous, amusing Neapolitan Jovine family, who turns to selling black-market goods to friends and neighbors in order to survive. But beyond the laughs, the play presents serious questions about community, integrity and the human condition.

The excellent Canada’s Stratford Festival star Seana McKenna (“Phèdre” at A.C.T.) plays Amalia, the feisty wife and mother with conveniently vacillating morals, who takes charge of the family business, while her husband, Genero (well-played by Marco Barricelli, “Vigil” at A.C.T.) enjoys his tirades about the upper classes taking advantage of the proletariat of Naples.

The first act begins in 1942. The extended Jovine family seems to enjoy the excitement of growing their black-market network out of their tiny street-level apartment. At first, the venture is more like a game — a means of fighting poverty and food shortages, while evening out the patricians’ playing field.

As the second act begins, fourteen months have passed. The Allied Forces have landed in Sicily and are marching through a scarred Italy as they chase the Nazis northward. Although the end of the war is nearing, conditions in Naples have seriously deteriorated. For the Jovines, bombings, air raids, shortages and short tempers intensify, while their lucrative profiteering exposes their selfishness, callousness, greed and immorality.

Just as the group is about to enjoy an elaborate birthday dinner for Amalia’s new business partner, her husband Genero, returns, debilitated from the war. He needs to express his physical and emotional suffering. Unfortunately, the diners are only interested in themselves, their food, and their efforts to ignore the personal misery of others.

Nevertheless, suffering does invade the Jovines’ now tastelessly redecorated apartment. Amalia, with the help of Genero’s moral center, finally gains some insight into the cost and effect of her callous behavior. The ending is a bit trite, but it’s well played, so we don’t mind very much.

With director Mark Rucker’s skill and a new translation, “Napoli!” shines as it recreate the pathetic conditions of many Neapolitan citizens during World War II. The casts’ talented acting makes every role prominent. The energetic casts’ Italian accents are well done and easy to understand, if a bit broad. Sharon Lockwood, as Adelaide, and Lisa Kitchens, as Assunta, trip the line between comedy and farce, but they inject some needed comic relief in the second act. And, of course, “Napoli!’s” message remains significant, as the disparity between rich and poor grows wider in our time.