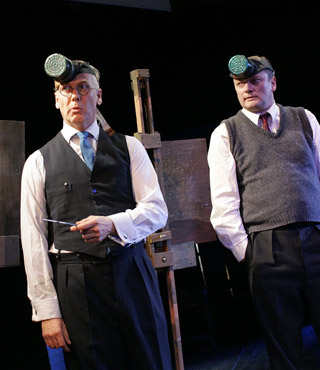 In 1934 a group of miners in Ashington, North-East England, began an
art appreciation class under the tutelage of a lecturer from
Armstrong College in nearby Newcastle. The class was organised under
the banner of the Workers Educational Association, intended as a
general interest endeavour with no practical dimension. Tutor Robert
Lyon soon found that the clearest way to teach the principles of art
to working class men without even much in the way of anecdotal
knowledge of art history was to facilitate the creation of art of
their own. The result was the now famous Ashington Group, a
collective working man’s art school that gained significant fame in
pre-war Britain and continued to operate thereafter.

Lee Hall’s play summarises and compresses the history of the
Ashington Group, creating a set of five characters standing in for
thirty or more and focusing most heavily on the theme of untutored
art in the context of modernism. It dramatises how a group of working
men developed a type of political aesthetic as heavily informed by
developments in industrial modernity as any avant-garde experiment,
but deployed techniques that were non-classical by dint of the
absence of formal skill rather than outright defiance of aesthetic
norms. In doing so, Hall does not suggest an ignorance of meaning or
precedent. On the contrary, his play precisely dramatises how these
men encountered the tradition of art through their practice, and
gradually found their place within it, all the while continuing their
daily work for their regular (low) income.

In form, the play comes to resemble a kind of art history class in
itself. It focuses on the disparate reactions of a motley crew of
characters to Robert Lyon’s (Ian Kelly) teaching (or at least his
context / agenda setting), which means that as Lyon sets a task or
raises a topic in aesthetics, meaning, or social purpose, the
audience too is introduced to its contours by way of mapping their
route to a response through those of the characters. There is George
Brown (Deka Walmsley), the officious rulebook-wielding Union Rep
whose sense of the world is informed by proper procedure. There is
Harry Wilson (Michael Hodgson), steeped in Marxist dogma and
constantly questioning the political value of any production of art.
There is Jimmy Floyd (David Whitaker), perennial comic relief,
embodying the unpretentious innocent. There is Oliver Kilbourn
(Christopher Connel), the group’s real-life superstar, representing
the instinctual artist with the passion for a broadening of horizons
and yet equally passionate about community, family, and rootedness.
There is also ‘young lad’ (Brian Lonsdale), the restless unemployed
youth granted entry ‘on sufferance’ and acting as a protean ‘angry
young man’ who will eventually face extinction in the war. Though
based on real people and using their real names and depictions of
their real works of art (projected onto screens in the theatre),
these are, nonetheless, dramatic archetypes deployed by Lee to
explore attitudes towards art and self-expression in the context of
the culture and economics of 1930s Britain.

It works beautifully for the most part on precisely these terms.
Though it is transparently dogmatic, it is effectively dramatised,
and the performances are crisp and focused. Each man knows his role,
so to speak, and performs it with believable humanity as well as
symbolic resonance. It is warm, funny, and definitively not
condescending in telling a truly fascinating real-life story, most of
the details of which are based on fact. However, the play lurches
awkwardly into overt didacticism as it moves to a conclusion. The
human dynamics of characterisation formed by the scenes of a group of
individuals encountering art and finding themselves relative to it
give way to a set of diatribes on elitism and a frankly tacky wrap-up
that presumes to juxtapose the optimism of social agenda of post-war
nationalisation with the failures of contemporary capitalism not by
dramatising it, but in the most gallingly undeserved of ways –
through surtitles summarising forty years of subsequent history. The
play’s final scene, in which the entire cast unite to sing a miner’s
song is clearly reaching for elegaic pathos, but it feels
manipulative, sentimental, and lazy. It is also surprising, given how
much care and attention had been put into the rest of the writing,
and the deliberation with which complex discourses around class and
culture had been unfolded throughout. Merely clubbing the audience
with the message by way of ending the show seems somehow worse than
failure and more like an act of self-negation. Still, the show
inspires interest in its subject, and no doubt will draw audiences
back towards the original art and artists, and that certainly is a
worthwhile result.