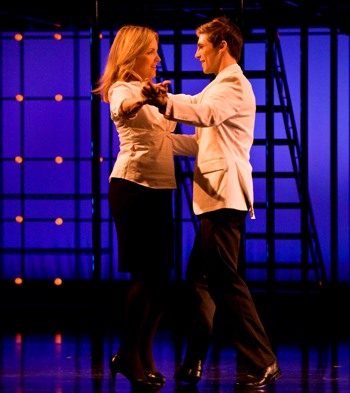 “Normal” and “ordinary” are relative concepts. But be assured there is nothing ordinary about “Next to Normal,” the 2010 Tony- and Pulitzer Prize-winning musical currently touring the country. Dealing with bipolar disorder is not such stuff as Broadway dreams are made on, but Tom Kitt’s powerhouse score and Brian Yorkey’s insightful book and lyrics, wedded to an ensemble cast that is next to perfection have made this one a winner. If rock music and mental illness scare you, by all means stay away. Otherwise, take the leap and have a theatrical experience that is way beyond the entertainment norm.

Diana (the incomparable Alice Ripley, who won the 2010 Best Actress Tony for this role) has suffered from bipolar disorder ever since the death of her infant son, some 18 years ago. Except he is still around in her delusions—her staunch supporter, her White Knight, the love of her life, keeping her emotionally distant from both her daughter (Emma Hunton) and loyal-but-enabling husband (Asa Somers). Natalie, the daughter, operates from a deep core of anger, going from the “good girl” who plays the piano and does all her homework to a club-hopping, pill-popping teen rebel in the course of the show. She longs for her mother to notice her, to come to her recitals and sports events, but she can’t compete with the absent brother who is always there. A budding romance with a fellow musician (Preston Sadleir) threatens to derail from the force of her unhappiness. Her song “Superboy and the Invisible Girl” powerfully outlines the dilemma.

The husband, Dan, is in denial. He never mentions Gabe, the son (wonderfully and seductively played by Curt Hansen). He pretends everything is all right and, for a while, Diana seems to go along with the game. Until, in a manic phase, she starts slapping pieces of bread on the floor to make sandwiches on a kind of assembly line. Then it’s off to the doctor once again. The pill-dispensing Dr. Fine is played by Jeremy Kushnier, as is the more sympathetic Dr. Madden, who works more intensively with Diana, first trying “talking” therapy, then hypnosis and then, in desperation, shock treatments.

Hard to see the humor in all this but, thanks to the book and the actors, it’s there. Recitation of lists of mood-altering drugs can be funny if delivered in a certain way. Diana, herself, keeps a caustic sense of humor about what is happening in her life. The show is not as bleak as its subject matter and, believe it or not, there are quite a few laughs. And some terrific songs. Kitt’s music runs the gamut from hard rock to a gentle waltz. It is totally wedded to the subject matter and moves the show along. The one flaw is that you can’t always understand all the words. And that’s too bad because the words are important. Nevertheless, you get the idea. And the ideas expressed in this show are moving and powerful. Love, grief, loyalty, anger, fear and regret—really all as normal as blueberry pie.