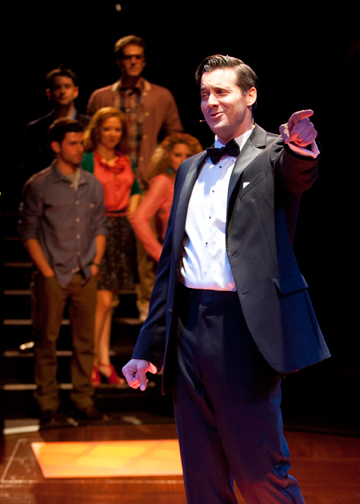 Music and lyrics by Gaby Alter
Book and lyrics by Itamar Moses
Directed by Michelle Tattenbaum
Choreography by Mandy Moore
The Old Globe Theatre, San Diego
May 9 to June 17, 2012

Here’s my problem with musicals: they repeat themselves. You watch a scene and then you get a song about the scene you just watched. Plot progression stops for a rehash. So imagine my delight that “Nobody Loves You” uses their singing interludes, and there are 19 of them, to advance the story. And that’s not even the thing I liked most.

Smartly written, funny, acutely observed, “Nobody Loves You” hits all its marks. Jeff (Adam Kantor) is a pedantic philosophy Ph.D. candidate who detests reality (and probably most other) television as an existential black hole. However, his girlfriend, Tanya (Nicole Lewis), is hooked on fading reality phenomenon “Nobody Loves You.” She indulges while he ridicules. No surprise that Tanya leaves him. In a fit of angst, Jeff applies to appear on the show.

The play itself is a wonderful sendup of “The Bachelor” and other reality staples. Couples are placed in hot tubs and mirrored rooms to warm them up for the camera. They give personal testimonials, which are replayed at the most inopportune times. Awkwardness is encouraged. Byron (Heath Calvert), the emcee, is vapid but affable. He gins up enthusiasm with hilarious promo lines and on-air histrionics.

Jeff’s menagerie of fellow cast members include Samantha (Kate Morgan Chadwick), who always gets her heart broken; Dominic (Alex Brightman), who has no interest in any relationship beyond a sexual one; Christian (Kelsey Kurz), who is actually an evangelical Christian; and Megan (Lauren Molina), an oversexed drunk. The cast rounds out with the producer, Nina (also Lewis) and her assistant Jenny (Jenni Barber).

Ensconced in the reality show, Jeff spends most of his time ridiculing the medium and avoiding the cameras, which Byron interprets as strategy. In reality, Jeff is taking notes for his dissertation and inadvertently courting Jenny. And yet, the limelight has a strange attraction.

Everything about this play works. The cast is brilliant. Special kudos to Brightman, who does a good job as Dominic but is hilarious as Jeff and Jenny’s respective roommates, Chazz and Evan. Ditto Calvert, who makes Byron likable despite the empty tuxedo.

The songs are even funnier, and often more insightful, than the dialogue. “So Much to Hate,” “The Obstacle Course of Love,” and “Crush Ceremony” stand out. At times, it seems like writers Gaby Alter and Itamar Moses are channeling Noel Coward.

The choreography by dance icon Mandy Moore is the perfect complement—entertaining, funny, even moving at times. Michelle Tattenbaum’s direction melds this ensemble of often over-the-top characters into a comedy machine and even finds room for poignant touches. The set, including drop-down cameras, evokes a sound stage but does just fine as various living rooms.

Have you ever watched television and laughed so hard you missed some of the dialogue? Just remember, there’s no TiVo in theater.