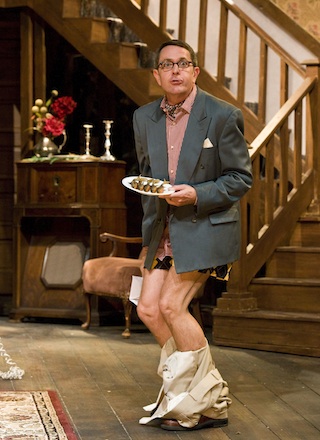 Stephen Rockwell in “Noises Off”
Photo by Craig Schwartz

By Michael Frayne
Directed by Julia Rodriguez-Elliott and Geoff Elliott
A Noise Within Theatre, Pasadena
Jan. 6-15, 2012

Farce, like Baskin-Robbins ice cream, comes in many flavors, with the slapsticky Three Stooges as one pole and the witty “Odd Couple” as the antipode, and, of course, a wide range of other in between. With all its chaos, hysteria and manic physicality, “Noises Off” inclines more to Curly, Moe and Larry than to Felix and Oscar. (Not that there’s anything wrong with that.)

The play, written by Michael Frayne back in 1982, deals with a British troupe struggling to ready a play-within-the-play— titled “Nothing On!”— for the road.

But Murphy’s Law prevails: whatever can go wrong, will go wrong and— does. Props appear where they shouldn’t or disappear from where they should, doors meant to be opened are stubbornly stuck, actors miss their cues or flub their lines, trousers are dropped and skirts hiked— and the audience revels in it all.

Co-directors Julia Rodriguez Elliott and Geoff Elliott move a spirited cast smartly through their paces, with Geoff doing double-duty as Lloyd Dallas, the insufferable director of “Nothing On.”

Dotty Otley (Deborah Strang), as Mrs. Clackett, the housekeeper for the Brents’ country home (keep in mind the players in “Noises Off” are also players in “Nothing On” and so have two stage names) is the pivot for most of the frenzy that occurs.

She’s taking things easy this one particular day, eating a plate of sardines while watching her favorite show on the telly, since she believes the owners, Frederick Fellows/Philip Brent (Stephen Rockwell) and Belinda Blair/ Flavia Brent (Jill Hill), are still on holiday in Spain.

That’s also the assumption of the Brents’ realtor, Garry Lejeune/ Roger Tramplemain (Michael Salazar), who figures the house is empty and thus a convenient place for a bit of afternoon delight with Brooke Ashton/Vicki (Emily Kosloski), a potential renter and more-than-willing delighter.

But then the Brents suddenly come home and, like the Three Bears of the children’s tale, find a lot of puzzling things that weren’t there before they set off for Spain.

Throw in the beleaguered stage manager Poppy Norton-Taylor (Lenne Klingaman), the equally-beleaguered company manager Tim Allgood (Shaun Anthony) and a tipsy burglar, Selsdon Mowbray (Apollo Dukakis), and it’s mayhem to the nth until all hands find themselves on deck in the third act and try to sort things out.

And I’d be remiss if I failed to mention another major element in “Noises Off”: the set. Designed by Adam Lillibridge, it’s a “Potemkin” structure, with one side as the elegant living room and second floor of the Brents’ mansion, and the backstage as the lean, utilitarian frame of any stage production. Cleverly divided, rotated and re-assembled from front to back and then front again during two intermissions by stage manager Dale Alan Cooke, assistant stage manager Martin Ruiz and backstage crew boss Trudi Knoedler, it gives the audience the opportunity to see both sides of a stage show.