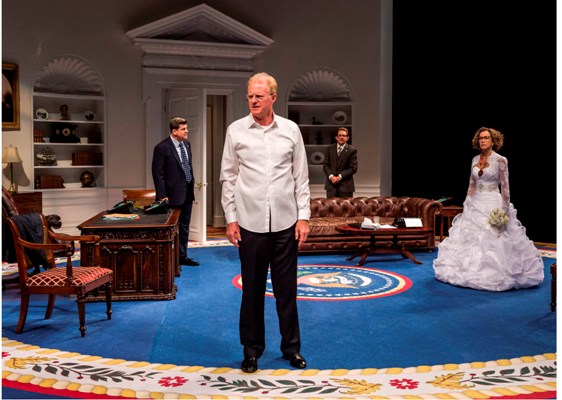 In addition to sausages and laws as things we’re better off not knowing how they’re made, perhaps we should add the day-in, day-out business that takes place in the Oval Office of the White House.

President Smith is only a few weeks away from a national election and the only thing lower than his poll numbers is the rusting hulk of the Titanic. He’s desperate for money and some sort, any sort, of political mojo to win re-election.

In this effort, he’s abetted by his chief of staff Archer Brown (Rod McLachlan) and speechwriter Clarice Bernstein (Felicity Huffman).

The prospect of money appears in the form of a lobbyist for the National Association of Turkey and Turkey Products Manufacturers (Todd Weeks) who’s seeking PR hoopla in the traditional pre-Thanksgiving presidential pardon for two turkeys; he turns out to be more of a pigeon when his initial offer of $30,000 as a “campaign contribution” falls well short of he grasping, cash-strapped president. The price suddenly rockets to $200-million and, of course, a lot of strings.

The promise of mojo lies with the magical wordsmith Bernstein, but her talents, like the money of the Turkey lobbyist, also comes at a price. A lesbian, she wants the President to marry her and her partner on national TV; if he’ll do that for her, she will write a speech for him that will mesmerize the nation and get him re-elected.

And, from out of nowhere, comes a Native American tribal chief (Gregory Cruz) who’s been profoundly insulted by President Smith in a telephone call and who has now come to Washington for vengeance.

It’s good when Smith fields a call from his wife, already starting to pack for their departure from the White House, who wants to know if she can take an antique piece of White House furniture back to their home.

It’s good when the President thinks he could coax some votes from the anti-immigrant constituency by building a fence along the U.S. border.

“We can’t build a fence to keep out the illegal immigrants,” Brown tells him.

“Because you need the illegal immigrants to build the fence.”

It’s not-so-good when Mamet scatter-shoots one-liners at lesbians, liberals, Jews, blacks, Democrats, Republicans, Iranians, American allies and foes, and scores of other targets. After a while, the shots begin to seem cheap.

Remember the “crowded cabin scene” from the Marx Brothers movie, “A Night At The Opera”? The director, Scott Zigler, apparently remembers it, for he keeps all five performers hopping around scenic designer Takeshi Kata’s recreation of the Oval Office. There’s a lot of picking up telephones and slamming them down, circling the President’s desk and flopping on the couch, opening and closing the door to the anteroom, pushing and shoving people in and out.

One thing should be kept in mind, however. Mamet wrote November in 2007 and it premiered in 2008. So if he was grinding a political axe, it couldn’t have been prompted by the current occupant in the Oval Office. But that fellow before Obama — what was his name?