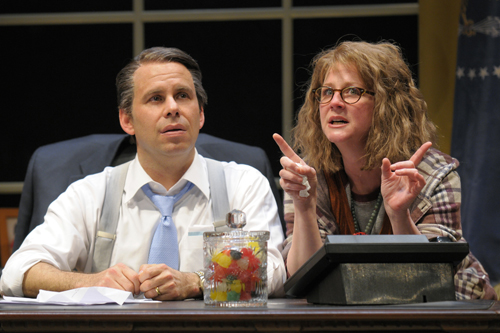 November is notorious for elections and potentially fowl weather (as in turkeys and lame ducks). David Mamet’s play of the same name takes on these and a few other issues, such as graft, gay marriage, presidential pardons and “extraordinary rendition” with hilarious results. A moderate success on Broadway, where it starred Nathan Lane and Laurie Metcalf as the President of the United States and his loyal, liberal, lesbian speechwriter Clarice Bernstein, it comes to American Conservatory Theater in San Francisco (ACT) with a topnotch cast, directed at a fast and furious pace by Ron Lagomarsino.

Don’t look for deep insights. Yes, there is betrayal but not on the heart-wrenching level of “Speed the Plow” and “Glengarry Glen Ross.” The trouble with Mamet is that he has written so much fine, piercing theater one expects a great deal from him. But this is a farce and, as such, a legitimate theatrical undertaking. So don’t think “American Buffalo” or “House of Cards” but of Mamet’s very funny, very silly movie “Wag the Dog,” also about presidential shenanigans.

Charles H.P. Smith (Andrew Polk) is in the waning days of his presidency. On the eve of an election “his numbers are lower than Gandhi’s cholesterol” (Mamet’s line, not mine); he can’t even raise enough money for a television spot let alone the presidential library his wife craves and he virtually has been deserted by his party. “Everybody hates you,” intones his right-hand man Archer (a wonderfully deadpan Anthony Fusco who seems to be channeling Niles from the old TV show “Frasier”). If President Smith, who bounces a Pilates ball around set designer Eric Flatmo’s Oval Office in order to think, reminds you of a recent chief executive, his money-raising schemes smack more of a recent governor of Illinois. Part Blagojevich, part Bush, President Smith also has a touch of San Francisco mayor Gavin Newsom as he struggles with his speechwriter’s urgent request to be married to her lesbian partner — on camera, no less.

Clarice Bernstein, the writer, played by the usually-beauteous ACT core member Rene Augesen, is almost unrecognizable here in costumer Alex Jaeger’s mismatched sweats and a bright red nose from a bad cold. Rounding out the excellent cast is Manoel Feliciano as someone who, for the sake of brevity, we will just call The Turkey Guy, a wimpy lobbyist with a bad comb-over who has brought the traditional turkey for the traditional Thanksgiving presidential pardon and a disgruntled Native American, usually played by Stephen Anthony Jones but well done by understudy Andrew Hurteau at the performance I saw. They all are perfect for their parts.

Mamet’s dialogue is sharp and filled with zinging one-liners as well as liberally sprinkled with his favorite four-letter word. The script (and President Smith) manages to insult everyone from gays to Native Americans, Chinese, Arabs, Jews, politicians, lobbyists and women in general. But, whatever persuasion you happen to be of, you won’t have time to be offended. You’ll be laughing too hard.