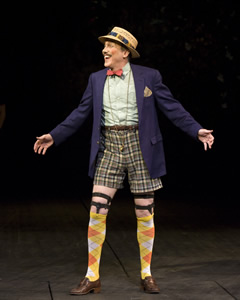 Twelfth Night is one of the most celebrated of Shakespeare’s plays, possibly for its easy-to-follow plot, but also for its timeless humor and catchy romance. The play centers on the beautiful heroine Viola, shipwrecked in a strange land. She disguises herself as the boy “Cesario” and works her way into the court of Duke Orsino. Impressed by this articulate and handsome young man, Orsino sends Cesario to woo Lady Olivia on the Duke’s behalf, but Cesario speaks so eloquently that Olivia is soon smitten – not with the Duke, but with Cesario. Meanwhile Viola has fallen in love with Orsino and finds herself, along with an entire comic entourage, entangled in a web of disguises, mistaken identities and misplaced affections.

The cast, 19 actors in residence at the Old Globe Theatre for the Summer Shakespeare Festival (Twelfth Night is performed in repertory with Cyrano de Bergerac and Coriolanus through September 27), includes many talents. Indeed, there are only first class performances in this show. Lovely Dana Green is gender-exploring Viola, Gerritt Vandermeer is debonair Duke Orsino and to complete this love triangle is Katie MacNichol as the dramatic Olivia. Another remarkable trio is composed of James Newcomb as the gester Feste, Eric Hoffmann as Olivia’s party-loving uncle Sir Toby Belch, and Bruce Turk in the role of Sir Andrew Aguecheek. They play well off each other and are exceptionally entertaining. Broadway veteran Patrick Page is an astounding Malvolio and University of San Diego Master of Fine Arts student Aubrey Saverino holds her own as Olivia’s waiting-gentlewoman, Maria. Greg Derelian is Antonio and Kevin Hoffmann plays Viola’s brother, Sebastian.

Paul Mullins has cleverly set this production on the Italian Riviera in the 1950s. This is a very clever and effective setting for this Shakespeare classic and presents a unique challenge for costume designer Linda Cho, who meets it with flying colors. The different attires for the roles of Olivia and Sir Andrew are especially noteworthy and add greatly to the character developments and comedic value of the play.  Christopher R. Walker designed sound and music and must be credited for the wonderful arrangements of Feste’s songs to match the time period. Barbershop Shakespeare never sounded so exquisite. Lights are designed by York Kennedy and scenic design is by Ralph Funicello. Whether you have seen this play once, 10 times or not at all, you will enjoy this excellent production.