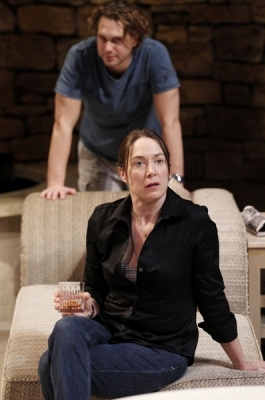 I’m a tough customer when it comes to mainstream contemporary drama. It’s harder than it looks to combine compelling storytelling, recognizable characters, psychological insight, sociopolitical awareness, richly literate writing, and lively theatricality while remaining truthful, entertaining, and original. It’s not that Jon Robin Baitz has never succumbed to the occasional cliché or authorial contrivance, but he has impressed me with the consistent excellence of his work more than almost any other American playwright, certainly of his generation. In plays like “A Fair Country,” “Mislansky/Zilinsky or ‘Schmucks,’” and “The Paris Letter,” Baitz zeroes in on corruption and moral rot as it shows up in various corners of business—publishing, academia, high finance, Hollywood, the art world. He’s probably best-known now as the creator of the hit TV series “Brothers and Sisters,” which exposed a wider audience to his gift for dramatizing intricate family dynamics in sophisticated dialogue. Those same talents shine especially bright in his latest play at Lincoln Center Theater, “Other Desert Cities.”

Forty-something novelist Brooke Wyeth (Elizabeth Marvel) has bounced back from a year-long crippling depression with a new book that’s been snapped up by Knopf, and she’s nervously brought the manuscript from home in New York as a Christmas present to her parents’ swanky abode in Palm Springs. Lyman Wyeth (Stacy Keach) and his wife Polly (Stockard Channing) are the kind of middling successful movie-biz types—he a B-movie actor, she a screenwriter—who followed their dear friends Ronnie and Nancy Reagan into the Republican Party, leaving behind Hollywood with its “drugs and lefties whining.” They’re hosting Brooke for a holiday gathering along with her brother Trip (Thomas Sadoski), who has created a reality-TV show (a cross between “Judge Judy” and “Dancing With the Stars”), and her aunt Silda (Linda Lavin), who co-wrote a series of chick flicks with Polly in bygone years but is currently broke and rebounding from rehab in her sister’s guest bedroom. Brooke has every right to be nervous about presenting her book to the family—it’s a memoir centered on her other brother Henry, who rebelled against his parents, joined a militant group of antiwar activists, and committed suicide after being implicated in a bombing that killed a janitor at an Army recruiting office.

Needless to say, this is a pretty rarefied atmosphere, not your typical American family. But writers write what they know, and Baitz knows a lot about not just Hollywood, writers, and show folk but also the collision of the creative community and conservative politics, how parents pick on children in the guise of protecting them, and how the story shifts according to who’s telling it. These are all characters it would be easy to make fun of. Baitz wisely lets them make fun of one another, the way family members do, but as playwright he treats their desires and their drawbacks sharply but respectfully. He has a masterly way of conveying miles of backstory with an offhanded remark and changing the temperature of the room with a single ominous word.

These characters spring to life full-blown, and their dialogue is believably chatty and funny, but Baitz is also a consummate craftsman who’s not afraid to withhold information strategically and who has an exquisite instinct for ending scenes on a grace note. “Other Desert Cities” is as meticulously plotted and orchestrated as any well-made Ibsen play (Baitz adapted “Hedda Gabler” for the 2001 Broadway version that starred Kate Burton) but the topical references and slangy diction keep the audience riveted and off-guard. And each character is drawn in many shades of light and dark. Brooke may be a writer with every good reason to resent her parents and their politics, but she can also be self-righteous and deluded. More challenging to liberal New York theatergoers—including me—is the play’s willingness to present staunch supporters of George Bush and the Iraq War as humans also capable of their own heroic sacrifices.

Baitz could not possibly have better comrades in realizing this play than director Joe Mantello (his former spouse and frequent collaborator) and the cast he assembled for the Lincoln Center production. I sort of groaned when I first heard that the plot turned on a character who has written an embarrassing family memoir—that overused trope—until I learned that the author would be played by Elizabeth Marvel, who can wring the cliché out of any character. She finds every subterranean shifting quality Baitz has planted in the character and then goes looking for more, with the help of costume designer David Zinn and hair specialist Paul Huntley, who create a look that tells more about her history of depression than anything she could possibly say. The same could be said, really, about every single actor. Who thought to drag Stacy Keach back to the stage? He’s just about perfect as kindly, diplomatic-to-a-fault Lyman. I don’t know who else but Stockard Channing could inhabit Polly Wyeth and make you care so much about her, even though she’s ruthlessly unfiltered, needling, shrewdly observant of every detail in her vicinity (she deflates her sister’s thrill at a shopping bargain with “That Pucci was made in a basement in Rangoon”) yet breathtakingly blind to her impact on others. As he did in “Becky Shaw” and “reasons to be pretty,” Thomas Sadoski radiates that cheerful slacker energy behind which 21st-century straight guys hide their depth and vulnerability. These actors are so good that any fleeting pockets of internal inconsistency or dramatic overstatement get instantly forgiven.

I’m sure that nothing I’ve said about the play so far has conveyed how funny “Other Desert Cities” is, because you sort of have to experience Linda Lavin’s performance to get it. Silda is the outside commentator and yet has a special relationship with each of the others. She’s an old lady who dresses like a teenager and dyes her hair some color that doesn’t exist in nature, foolish and brave and down on her luck. Lavin gets the shortest amount of stage time (some of which she spends sleeping on the couch) and the fewest number of lines, but she knocks every single one of them out of the park, as if they’re standup bits written by Bruce Vilanch for Bette Midler. “Palm Springs isn’t a refuge, it’s King Tut’s tomb,” she insists. “It’s full of mummies with tans.”