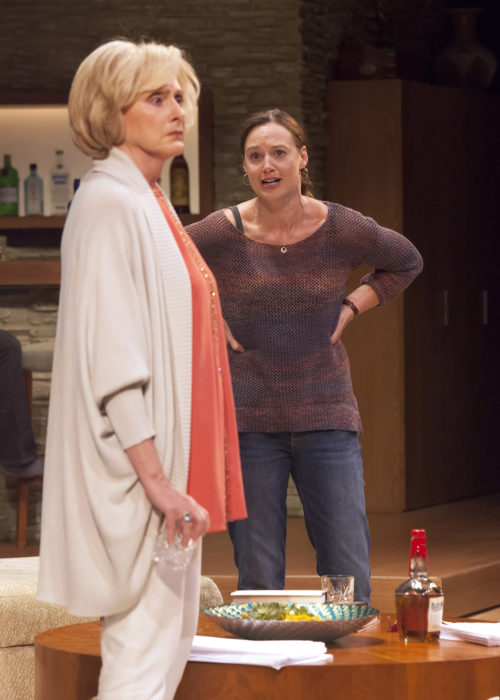 What do adult children owe their parents? For that matter, what do parents owe their children? They lead separate lives but share pieces of a common past framed by disparate points of view. Do the parents need to justify their actions? The children? “Other Desert Cities” dives into these issues and produces some interesting, though not entirely satisfying, answers.

Set in Palm Springs during Christmas, 2004, the story observes the Wyeth family as they try to reconcile past and present. The parents, Lyman (Robert Foxworth) and Polly (Kandis Chappell) are former Hollywood glitterati and old school Republicans, law-and-order conservatives who refer to the Reagans affectionately as Ronnie and Nancy. Their daughter, Brooke (Dana Green), a fragile writer recovering from years of depression, is visiting from the East Coast. Their son, Trip (Andy Bean), is an earnest reality television producer. Polly’s spunky sister, Silda Grauman (Robin Pearson Rose), is living with them while recovering from alcoholism.

As the show opens, the children’s liberal politics clash with their parents’ heartfelt conservatism. The Iraq War bubbles to the surface. Polly and Brooke spar, Trip intervenes, Lyman looks on with paternal patience. But there’s a parallel war at the heart of the family’s dysfunction: Vietnam. The Wyeth’s eldest son, Henry, had joined a violent anti-war group and subsequently committed suicide. The elder Wyeths don’t discuss Henry. Polly even refers to her “two” children.

But Brooke carries the scars and has written a tell-all memoir to exorcise those demons. For months, she has lied to her parents, telling them she has written a novel. She must perform the tricky dance of getting their blessing on a book that implicates them in Henry’s suicide.

The play’s greatest strength is its dialogue, particularly the hilarious zingers between Polly/Brooke and Polly/Silda. Chappell is outstanding, investing Polly’s upright defense of her and Lyman’s values with both courage and viciousness. Rose’s Silda more than keeps up, displaying a cunning instinct for Polly’s weaknesses. But it’s Foxworth who anchors the show, playing Lyman with patriarchal restraint. Despite Polly’s fireworks, Lyman is the decider.

Brooke is more problematic. Angry, distraught, overmedicated, embarrassed by her own lies but liberated by the “truth” of her book, it’s a tough role to finesse. Green hits it at times but gets tripped up by the constant need to explain everything. The family’s long, painful history is both comic gold and expository quicksand.

Seer’s direction is capable, though slow at times. He springs Silda onstage like a jack-in-the-box, to good effect. Set entirely in the Wyeth’s living room, the house is a modernist’s dream—like one of David Hockney’s lesser works.

With its efforts to weave in Iraq, Vietnam, suicide, depression, alcoholism, parental and filial responsibility, conservative/liberal values, secrets and outright lies, “Other Desert Cities” valiantly attempts to stuff a world of potent issues into a small box. Kudos to Baitz, Seer and the cast for coming so close.