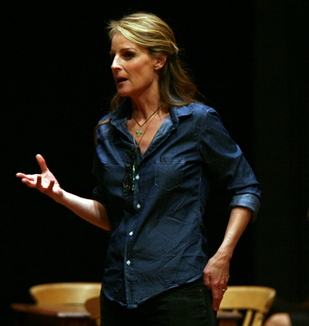 We are born, we live, and then we die. There is no escape. It is a universal truth; the only variations are how? And how long? “Our Town” is a blunt confrontation with the ordinariness of the universal trajectory. Simply stated, Act I is entitled Daily Life; Act II is Love/Marriage; Act III is Death/Loss. That is it in stark simplicity. Avant-garde when Thornton Wilder won the Pulitzer Prize in 1938, it is often presented as a somewhat sentimental/philosophical homage to times past — times that were presumably more simple. As such, most days one can find a straightforward production of “Our Town” somewhere in the United States by some sort of company from professional, to community, to high school drama group. Chances are you have experienced at least one performance before. Probably more.

So why all the fuss about this production and why should you entertain getting tickets? Without a doubt, first and foremost there is Helen Hunt. She brings a refreshingly real, no-nonsense, non-sentimental approach to the role of the stage manager. Hers is not bathed in nostalgia nor viewed through a Vaseline-coated lens. After seeing Hunt, it would be hard to imagine going to see “Our Town” once again with some guy in a cardigan playing Stage Manager, perched on a stool at the corner of the stage, and looking on with a benevolent gaze. She has a job to do, and do it with force she does. The role is in stark contrast to the very conventional woman-at-home roles of the hardworking Mrs. Gibbs or Mrs. Webb.

Conceived and directed by 2010 MacArthur Fellow David Cromer, this production has arrived in Santa Monica after very successful runs in Chicago and New York, where Cromer himself played the role of Stage Manager. You could say it is a naked production: No stage sets with New England saltboxes dotting the horizon. No props except for The Webbs’ house, which is suggested by one kitchen, table, Doc Gibbs’ by another downstage. Costumes do not define time. There is nothing precious about it. You are born, you live, you die. For the most part Cromer’s approach brings Grover’s Corners to life and is much more meaningful for current audiences. I suspect Wilder would approve. It only strays when actors are left to perform elaborate and distracting pantomimes, such as Mrs. Gibbs’ fussy and nonsensical bustling in her kitchen.

Spatially, Cromer’s concept is that the production should conform itself to the area available and that the area can be manipulated to suit the production. By this sleight-of-hand, the Broad’s more conventional proscenium has been completely revamped by building a false floor above the existing Broad stage and ground floor seating. Seats are on bleachers in an elongated U. You read that right; this is theater in the U, not the round. Most of the action takes place on the very long (90 feet, more or less), very narrow, center space (think single bowling alley proportions), bordered by banks of seats, which also have gaps through which some of the action flows. The Broad’s seating capacity is reduced by upwards of 200. The theaters were considerably smaller in Chicago and New York, and I suspect the configuration worked better. Regarding this detail of the staging, it is a case of new, for the sake of new, and is not necessarily better. With the exception of Hunt — her Shakespeare training evident — not all actors were equally audible from all parts of the stage to all locations in the audience.

Given a choice, I would have preferred seeing Cromer’s staging in a considerably smaller venue, but one cannot always choose. This is an “Our Town” for our times; there is no escaping its essential truth: you are born, you live, you die. One moral might be, “make the most of it.”