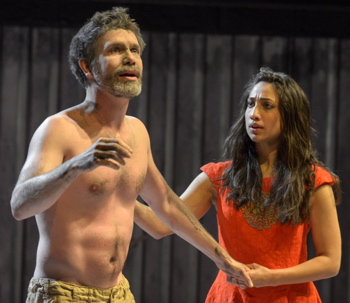 Incest, attempted murder, pirates and a virgin imprisoned in a brothel. The latest episode of your favorite soap? Nah, it’s Shakespeare — well, maybe it’s Shakespeare. The authorship of “Pericles, Prince of Tyre” has been in contention by scholars for some 400 years. Did he write all of it or part of it or any of it? Doesn’t really matter because its inclusion in the Third Folio places it officially in the Shakespeare canon, no matter how weird it might be. And it’s plenty weird! With a Byzantine plot that has more twists and turns than San Francisco’s Lombard Street, “Pericles” can be a real snooze if done straight — and straight through.

Thank goodness Mark Wing-Davey doesn’t play it straight. The respected director’s jazzed-up, abridged adaptation of the work at Berkeley Rep, done in conjunction with Jim Calder, who also designed the movement — and there’s plenty of it — shoots along like the Bard on speed, with plenty of laughs, much music (by the affable Marc Gwinn who leads an audience sing-along as a curtain-raiser) and a capable octet of actors portraying what seems like a cast of thousands. It’s a lot of fun, which is not something I lightly say about this play, previously considered as “Pericles of Tire.”

The theater has spared no expense in mounting the piece. Crystal chandeliers descend to encase princesses; costumes (by Meg Neville) glitter with reflecting mirrors. There are several storms at sea (lighting by Bradley King and sound by Jake Rodriguez); the funniest tournament you’ve ever seen and, when Pericles wins the lady fair, a wedding night to remember — on a water bed no less.

The indispensable James Carpenter plays both kings: the evil, incestuous Antiochus — dressed in gorgeous robes and platform shoes, and the kindly Simonides — who wears a baseball cap instead of a crown. The good — and somewhat naïve — Pericles is David Barlow, and Jessica Kitchens his lady love (as well as an evil queen who has a great drunk scene). Anita Carey is the narrator who keeps us moving back and forth in time and space between Tyre and Tarsus, mythical shores and Italy, managing to make it all more or less understandable along the way. Annapurna Sriram is Marina, Pericles’ lost child, so pure she manages to convert her brothel clients to a path of virtue. The cast is rounded out by Rami Margron, James Patrick Nelson and Evan Zes, and they all do an outstanding job as pirates, fisherman, assassins and whorehouse operators. Oh, and there is a real deus ex machina who descends in a real machine to move the plot along.

And move along it does, by sea and land, with cell phones co-existing with crowns, cloaks and daggers and pirates who strangely resemble Somalis. This “Pericles” is topical, hysterical and, thanks to Wing-Davey & Co., easy to understand. It may not be Shakespeare but it’s a great evening’s entertainment.