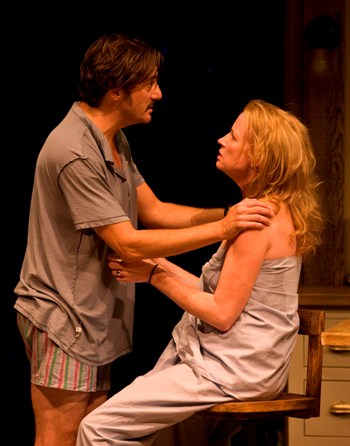 “Poor Behavior” is just that, over two and a quarter hours of poor behavior in the most perfect Connecticut vacation home kitchen you have ever imagined. Town and Country magazine may want to do a photo shoot. But before anything else is said, kudos to scenic designer John Lee Beatty. Even nonstop poor behavior could not diminish the pleasure of seeing this set.

Have you ever had neighbors who battled continuously night and day? If so, you will know how it felt sitting there opening night, praying silently for a ceasefire. By the time a pseudo suspension of hostilities occurred, frankly my dear, I didn’t give a damn.

Act I opens in the heavenly kitchen with a man, Ian (played by Reg Rogers) in heated battle with a woman, Ella (played by Johanna Day). Ian and his wife have been invited to spend the weekend in the country home of Ella and her husband, and the dinner conversation has become overheated. It is an endless, wine-soaked, sophomoric wrangle over whether or not there is such a thing as “good” or “beauty” or “morality.” I think it is fair to say that their argument is at the level of precocious high-school sophomores thinking they sound erudite. On and on they go, heedless of their spouses, Maureen and Peter (played by Sharon Lawrence and Christopher Evan Welch), who make several weak attempts at distracting the combatants. Add more wine, and here comes more argument. Mercifully, at least some of them need to go to sleep.

To give a summary of “Poor Behavior” beyond this would spoil the couple of plot twists that add any interest to Theresa Rebeck‘s belabored effort. Suffice it to say, marriage does not fare well here, and there are enough familiar glimpses to help sustain some interest. They all engage in poor behavior; Ian and Maureen’s behaviors are pathological. Maureen is a highly manipulative hysteric, but despite Lawrence’s heavy bio, her portrayal is completely unconvincing, bordering on caricature. Ian raises manipulation to new heights. It is hard to see why anyone would invite him to coffee, let alone want to spend a weekend with him anywhere. Rogers portrays him with strange postural tics and delivers his lines at breakneck speed, tripping up here and there, as does Day.

As Ian, Reg Rogers has strange postural tics and delivers his lines at break-neck speed, tripping up here and there as does Johanna Day. Was director Doug Hughes hoping to get the action over in less time? Perhaps with Rebeck’s weak and belabored script the options were few. The arguments are so shallow, the snafus do not even matter. The best line of the evening is delivered by Ella, “tomatoes in the muffins? Some people have too much time on their hands.” From all appearances that conclusion could be applied to all four characters.

If ever you thought a beautiful kitchen looking out on the woods could make up for something missing in your life, “Poor Behavior” will show you just how wrong you can be.