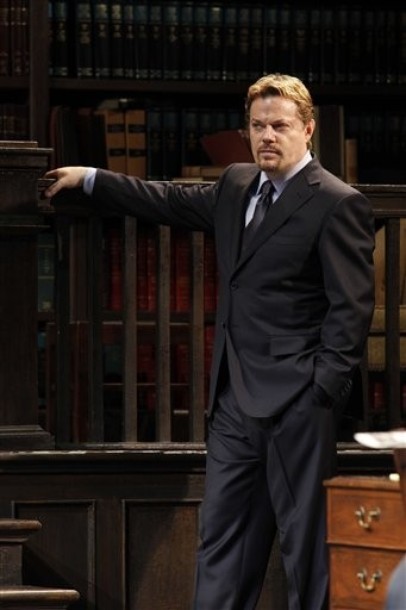 Charles Strickland, a wealthy white patrician, stands accused of rape by an African American girl of his acquaintance. The play begins as he meets with Jack Lawson and Henry Brown, attorneys-at-law: one black, one white. The case is a loser. As Lawson explains, 50 years ago, Strickland would be innocent, whether he did it or not. Today he is guilty in exactly the same way. But due to some inopportune phone calls by their intern, Susan, Lawson and Brown find themselves committed to the defense. How can you win this case? Even if you win, you lose: tarnished with the reputation of defending a privileged white male who clearly must be guilty (as noted).

“Race” is certainly a think-piece: a collection of observations and ponderables about racial relations in modern America and how these are presented or represented. There’s a reflexive quality to it, as David Mamet has Lawson and Brown expound in detail about the art of smoke and mirrors that is the practice of law. It’s not about the truth, Lawson explains, it’s about the prosecution and the defense telling stories, and about making sure yours is the better one, so the jury won’t remember the other. The truth is that race is a reality, as is racism and racial profiling, and any story involving characters of a particular and observed race will inevitably trigger racialized responses. The trick, we’re told, is to make it so that this doesn’t actually matter — give the jury something else to think about and they’ll put aside their racialized thinking.

Mamet plays a certain amount of games with this premise — indulging this reflexive strain by way of asking us to tolerate a play that is not really about the core human drama at the center of its story. He’s asking us to to play the jury in reverse: to remove the veil of distraction and realize that it really is about race because that’s what drives and motivates everything that happens before us. It’s a confrontation, a provocation. We shouldn’t be surprised at this from Mamet, but what is a surprise is how mild it all seems, how very uninvolving and unaffecting. It becomes a clinical exercise in abstract thought: a logic problem  presented in the form of story that ultimately undermines the intellectual process itself because it tells us that that process is really a way of disguising and rationalizing what is a deep, atavistic, xenophobic impulse fundamental to all humans — a recognition of a racial “other” that is ultimately always your enemy. Society is a collection of conventions, rules, and games that allow us to at least pretend to get along. This is all very well, but given that the play ever really presents a sense of that underlying atavism as a primal energy (and not even in a simmering-under-the-surface Pinteresque way), the play is really all higher brain beard-stroking, and it never hits home.

The play is also, as a consequence, very leisurely in a bad way. The all-too laid back, almost unflappable attourneys throw racial hardballs left and right and yet no one seems to move. Oh, Mamet directs stage movement, yes, beginning with an in media res move by Jack Lawson as the curtain rises that gives a sense of a conversation well in progress. But there’s no emotional energy on stage — no real sense of collision,  of danger. The lawsuit is almost irrelevant. Everything is. It’s all about getting Mamet’s thoughts on race out there in the mouths of characters constructed to put all of the elements of his thinking in play with one another. The characters don’t live and breathe. And the play doesn’t either: it’s inert as drama and limited in its capacity to supply the simple pleasures of theatre as Mamet flexes his authorial muscles to raise the issues he makes his painfully literal subject (could the title be any more direct?).

The performers do their best too enliven the proceedings, with Eddie Izzard ably taking over from James Spader as Jack Lawson. Izzard’s slightly English-tinged accent adds another level of dissociation to the proceedings, but he manages a good range of tones in his many lengthy moments of lecture. Dennis Haysbert assumes the role of Henry Brown with cool authority, and plays his scenes with Afton C. Williamson as Susan with a subtle edge that Mamet has built in (the black man vs. the black woman: inviting us to revisit much older and more familiar dimensions of Mametian character conflict — through gender). Williamson is suitably controlled as Susan, the only character with any sort of mystery and the only one given significant narrative agency in the end. Richard Thomas looks nervy as he should as the rich and powerful man who has become aware of the boundaries of that power and has fallen victim to a guilt complex that runs deeper than any “mere” felony charge.

“Race” is not first-rate Mamet. It lacks energy, it moves too slowly over its surprisingly short running time and achieves relatively little. It doesn’t tell much of a story (about characters, about society, about race) and it fails to deliver the crackle at the level of language that we have come to expect from this writer. Mamet enjoys deploying racial epithets and some profanity, but there’s no real violence in the dialogue, no penetrative, incisive deconstruction of the language of race and racism, merely a limp presentation of its conventions. Yes, it has value in asking questions about race in America at all, and even in asking them this directly, but it is surprising that a writer of this caliber ultimately appears so muted by his own methods in tackling the subject through this form.