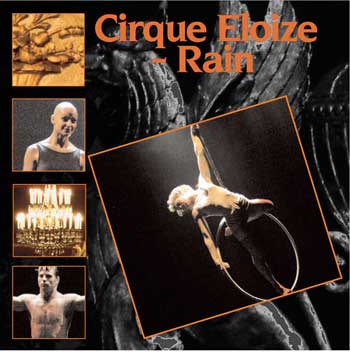 These days, circuses come with authors rather than ringmasters, and the art form that once included elephants and lion tamers has been re-imagined sans animals. Cirque �loize, one of the new-form circuses to originate in the French-speaking world and head out around the globe, is designed for the theater rather than the bigtop, a blend of image, narrative and humor that is woven around acrobatic tricks to create something more adult-oriented than Ringling Brothers, Barnum and Bailey. It&#146;s a dreamy, cinematic production, with danger and emotion wrapped together by the performer/actors, and it&#146;s all beautifully lit.

Where Cirque du Soleil has taken its formula glitzy and big, (there are even cruise-liners advertising versions of the show) there are as many possible points-of-view as there are "authors" and �loize director Daniele Finzi Pasca has designed a more character-driven show for its production, Rain. Described in the program notes as a show-within-a-show, a theatre where a circus show is in rehearsal, the narrative elements seem mainly a pretext for the creation of some lovely images using lighting, scenic elements and bodies flying around. What grounds all the acrobatics are the performances by the artists, who, often-as-not, use subtle rather than slapstick humor as a means to connect to their audience.

There is a sense of nostalgia in Cirque �loize. The musical score, featuring both recorded music and live piano with accompaniment by the performers (whose own little marching band wends its way across the stage like characters in a Fellini movie) puts things in a bittersweet mood. There is no big-top oom-pah-pah going on. Likewise, the costumes are 1920&#146;s vaudevillian, with the (big-hipped, pleasingly real-looking) women in stockings and tanks, and the men in muscle suits, for their "acts". Otherwise, everyone wanders around in dresses and street clothes, but those your grandparents might have worn.

The title, Rain, is an unfulfilled promise, implying messages and signs rather than moisture, until the very end. The use of real water during the last minutes of the show creates earned magic, a logical, emotionally-satisfying conclusion to a performance that has skillfully brought its audience along into another place and time. That&#146;s what theatre is supposed to do.