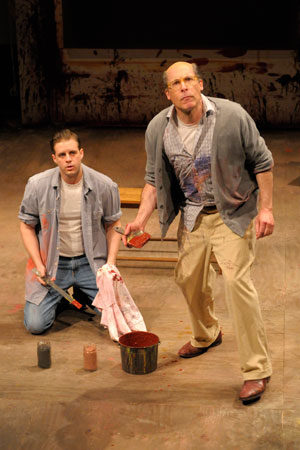 There are as many layers of meaning in John Logan’s 90-minute drama about artist Mark Rothko as there are layers of paint on a Rothko canvas. It’s about depression and ambition; fathers and sons and mentors; past and future; art and the art of living. A powerhouse evening of theater, “Red” justly deserved its Best Play Tony Award. It’s sure the best play I’ve seen in a long, long time.

Logan, best known as a screenwriter (“Gladiator,” “The Aviator,” “Hugo”), has taken a real incident in the painter’s life — the huge commission of murals for The Four Seasons Restaurant in the Seagram’s Building in New York — and built on it. The canvas of “Red” is stretched taut as two men, Rothko (David Chandler) and his assistant (John Brummer), a young, aspiring artist in his own right, go at each other on Louisa Thompson’s artfully messy, paint-spattered studio set. And, by the end, you get the picture: a brilliant, quirky and profoundly depressed man who will take his own life a few years after the curtain comes down.

The younger man is not without his own baggage. Orphaned and a witness to a horrible crime in his childhood, he both worships Rothko and is driven crazy by the older painter’s nonstop pontificating and judgmental attitudes. Reduced to mixing paints, cleaning brushes and fetching coffee and Chinese takeout, he longs to show the master a work of his own but is too intimidated. Rothko, an intensely cultivated man, prefers to paint to the great classics; Ken, the kid, wouldn’t mind a little jazz now and then. Ken’s favorite painter is Jackson Pollock, a talent the older man deems corrupted by commercial success. Rothko reveres the Old Masters, particularly Caravaggio, who lit his paintings from within, and Rembrandt, who made the Hebrew letters in “Belshazzar’s Feast” shimmer off the canvas.

Rothko, a refugee from the shtetls of Eastern Europe who changed his name for commercial reasons, is himself a victim of changing tastes and changing fortunes. Having struggled for most of his life, he now finds himself rich and famous and in thrall to his own ego. He fears the coming of old age and the dulling of passion, the turning of the vibrant reds of living into the black of death. “As you get older, the colors fade,” he says. (And, historically, his later palette became more and more somber). But Ken is young and just beginning his life’s adventure. So the push and pull of youth and age; reason and passion comes into play as well. In the end, Ken learns to stand up to his bullying mentor, with surprising results.

Both actors are superb in their roles, Chandler inhabiting the angry, sensitive skin of Rothko so fully that you feel you know this man — whether you actually would want to or not. Brummer begins as a cowed acolyte and there is a joy in watching the character grow. Former associate artistic director Les Waters, in his valedictory stint at Berkeley Rep before taking over at Actor’s Theatre of Louisville, has orchestrated the whole thing so beautifully that it’s hard to tell the dancers from the dance. If you thought these modern artists just slap paint on a canvas — and there’s one very funny scene here where they do just that, in time to a Beethoven symphony — think again. You’ll sure never look at a Rothko the same way. In fact, you may not look at any art quite as you did before.