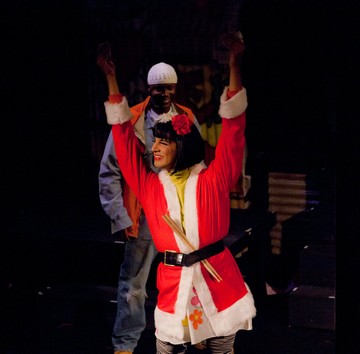 Is there anything that hasn’t been said about Jonathan Larson’s rock opera? This musical great-grandchild of Puccini’s “La Bohème” ran for 12 years [1996-2008] in New York and racked up 5,124 peformances to become the ninth-longest Broadway show to date. It won a Pulitzer. It won a Tony. It has won at least a dozen other awards. Productions have been mounted across the U.S., Australia, Japan, United Kingdom, Mexico, Argentina, New Zealand and Peru. It was adapted into a 2005 movie. Enough said?

So if words fail, then let’s try the letter “e” to describe the Royal Underground company’s version of “Rent” at the Hudson Backstage Theatre in Hollywood: “e” for energy, enthusiasm and excitement. Excellent, however? Ennnh….more about that in a moment.

Like “La Bohème,” “Rent” is the story of a group of young artists struggling to survive in a tough city at a tough time in the year—winter. Larson [who died of an aortic rupture just days before the show premiered in 1996] updated its premise by changing the time from the late 19th century to the present, the locale from Paris to New York, the setting from a garret to a loft, the protagonist’s name and profession from Rodolfo the poet to Roger the songwriter/HIV-positive/former drug addict and Mimi [Larson kept her name from the original] from seamstress to S&M dancer and her death from tuberculosis to heroin overdose.

While he was at it, Larson also added a pair of lesbian lovers, a transvestite and his gay partner, a bag lady, a squeegee man and the AIDS epidemic. No contemporary cultural stone was left unturned in this musical play.

Director Jerianne Banson, in the program, hints at some changes she also made to the play but doesn’t specify them. She might have begun with Adrienne Frasier’s set, which didn’t suggest a lower East Side loft so much as it did a city dump. Anchoring stage left was a tall stepladder festooned with bicycle wheels, hubcaps and other trash with little or no relevance to the play or the performers. Give Frasier credit for this, however: she did include a few Keith Haring figures on a back wall.

Not to be unkind, but this production of “Rent” might also have benefited from voice and acting lessons for some of the 15 members of the Royal Underground cast. Most were good, their songs soaring naturally from personalities they had clearly defined. Some were adequate. A few, however, either projected their voices weakly to the house or struggled to stay on-key. Whereas Jason Aaronson, as Mark, a sort of roving narrator for the musical, played well with others, Enrico Banson, as Roger (Rodolfo), lacked spontaneity; he came across as a jack-in-the-box, waiting for his cue and then—boing!—delivered his line(s) before reverting to watchful spectator and reloading the spring for his next cue. His performance was stiff.

Two young women really shone: Josie Yount as Maureen, and Ali Eagle, as several different characters. (Both are so youthful-looking you’d be well advised to card them before serving them so much as a Coke.) Although slim as the chances of winning the lottery, Yount has a bright, lively voice and threw herself not only into the character of Maureen, one of the lesbian lovers, but also physically on, around and into the set. Eagle has a clear, strong voice as well and was especially delightful as an over-anxious mother on the phone “just-calling-to-see-how” her sonMark was doing.

The Royal Underground cast is decidedly young and presumably will grow and master the acting craft. Those who don’t, of course, will eventually have to find some other line of work to pay the rent.

Correction: Owing to a miscommunication by the producers, an earlier version of this review stated that a substitute performed for Josie Yount on the night our critic attended. In fact, Yount was onstage playing the role of Maureen.