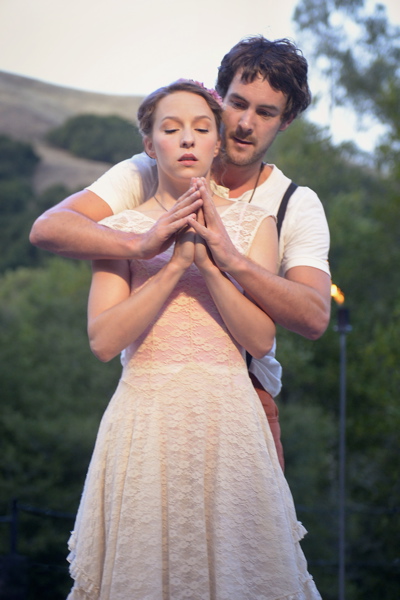 Cal Shakes’ new production of “Romeo and Juliet” is like watching Shakespeare on speed. Director Shana Cooper has crafted a 21st century love story that propels the audience through the all-too-familiar plot on the wings of teenage passion, both for bonding and for blood sport. And the ampersand in the title above is intentional, as are Romeo’s beat-up jeans and Mercutio’s overflowing beer can. No cell phones or computers (thank heavens) but a bare stage that allows you to build your own Verona in imagination, with occasional set props like a scaffold for a balcony, a bed, a bier, torches and a fire pit (Daniel Ostling, designer).

Much has been cut to bring this “R&J” in in just over two hours but little has been lost. The star cross’d lovers meet and sigh and wed and bed and part and die just as before, but perhaps with a little more energy than usual. Rebekah Brockman, luminous as Juliet, holds the whole thing together with a performance that matches her recent triumph as Thomasina in A.C.T.’s recent “Arcadia.” Brockman had better watch out or she will be permanently typecast as a precocious 13-year-old. She does it so well. Then again, time will probably take care of that, as it does so many things.

Her Romeo is Dan Clegg, scruffy, energetic and in love with love. I found his slight British accent jarring, as no one else in the cast had one. Together they are an appealing pair of young lovers who can’t keep their eyes, hands or lips off each other. The other performance that anchors the ensemble is Cal Shakes veteran Domenique Lozano as Juliet’s wise, earthy and sympathetic nurse. Lozano also doubles as the Prince of Verona, a small part mostly involved with scolding the warring clans of Montague and Capulet for brawling in the streets.

Mercutio, that champion brawler and Romeo’s best friend, is well-played by Joseph J. Parks, delivering one of the most entertaining “Queen Mab” speeches I’ve heard. But Arwen Anderson is a disappointing Benvolio, Romeo’s cousin and other friend. Even worse is her wooden interpretation of the distant and aloof Lady Capulet. There are only seven people in this show and everyone, with the exception of the title characters, doubles in roles. This tactic is most successful with Bay Area stalwart Dan Hiatt who is a powerful Lord Capulet and a sympathetic Friar Lawrence, almost making you believe they are not played by the same actor.

But Nick Gabriel makes kind of a mess of both the pugnacious Tybalt, Juliet’s cousin – the guy who stabs Mercutio and is killed in turn by Romeo, setting in motion the darker side of the story – and Count Paris, the man old Capulet has chosen for his daughter to wed, not knowing that she has already married another, a scion of the enemy Montagues to boot.

Both the music, by Paul James Prendergast, and the movement, by choreographer Erika Chong Shuch, are pleasant but slight and do little to enhance the production. It is the concept itself and director Cooper’s realization of it – the sheer propulsion of the plot as if borne on the exuberance of youth and the inevitability of tragedy – that make this “Romeo & Juliet” different from those you may have seen before. Its gritty look and vernacular sound make it less Zefferelli and more “West Side Story,” less pretty but no less moving in the end. “For never was there a tale of such woe …”