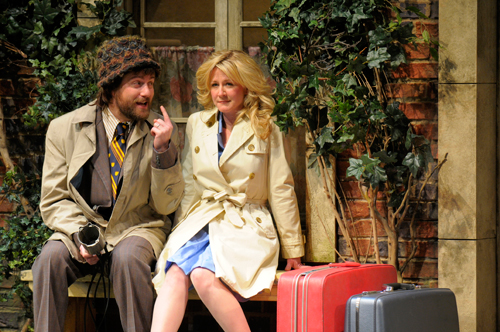 Round and Round the Garden

Norman (Manoel Felciano) and Ruth (René Augesen) in ACT’s “Round and Round the Garden.”
Photo by Kevin Berne.

You know that ubiquitous announcement that comes out of nowhere at the beginning of every play – the one that tells you to turn off your cell phone and unwrap your candies? Have you ever heard one that was way funnier than the comedy it preceded? Go to American Conservatory Theater in San Francisco right now. The intro is the most hilarious part of the show. As the Brits would say: “Brilliant!”

Maybe you have to be British (although “The Norman Conquests,” a trilogy of which this one, “Round and Round the Garden,” is the third in line, conquered New York back in the day). Alan Ayckbourn’s 1975 sex farce definitely is rooted in place, not only England but specifically the aforementioned garden, belonging to the mother-in-law of the randy librarian, Norman (Manoel Felciano), and tended by his often dirt-encrusted sister-in-law, Annie (Delia MacDougall). These two have a thing for one another and are planning a clandestine weekend at a hotel. Thereby hangs the tale, such as it is.

The entire first act is given up to their plans and how they fall through, due partially to the other people in their lives – Norman’s wife, Ruth (René Augesen), and Annie’s longtime suitor, Tom ( a wonderfully repressed Dan Hiatt), and partially to the would-be lovers’ own limitations – her inhibitions and his penchant for drink and anything in skirts. The arrival of Annie’s brother Reg (Anthony Fusco) and his uptight wife, Sarah (Marcia Pizzo), come to baby-sit the elderly, unseen matriarch upstairs while Annie goes off on her “holiday,” completely gums up the works.

Before the intermission, Norman will have made advances to both women, alienated the suitor and been caught in a compromising position (literally) with his brother-in-law. Trouble is, all these goings-on aren’t nearly as funny as they’re supposed to be. Despite Ayckbourn’s reputation as the most often performed living playwright on the planet (Is that even true, and what about Neil Simon?) and a cast comprised of some of the Bay Area’s finest actors, “Round and Round the Garden” is strangely inert for all its frenetic activity. One wanders out into the lobby wondering what all the hype was about.

Enter the beauteous Augesen, who plays Norman’s acerbic and sensible – if not always sensuous – wife to save the day in Act II. Called in to curb her husband’s excesses, Ruth takes over the stage and, beginning with her initial wrestling match with a recalcitrant lawn chair, the laughs keep coming. It’s as though she has energized the entire cast. Or maybe the resolutions of the second half of this sex-fest in the English countryside are just funnier than the set-up of Act I. Felciano, as her not-too-faithful spouse, is another matter. A very good-looking guy in real life, the actor, as Norman, is a mess in a hat that could double as fright wig. Since he doesn’t have a great deal of charm either, one wonders what all these women see in him. Hiatt and Fusco are their usual fussy wonderful selves, and Pizzo does a good job as Sarah, whose hormones ultimately eat away at her principles. MacDougall, who really is the heroine of the piece, albeit a bedraggled one, has a whiny delivery that grates on the ear after a time.

Ralph Funicello’s bucolic landscape of a set, replete with birdsong, is a winner, and the costumes, by Lydia Tanji, are appropriate if, in the case of the leading man, a tad bizarre. Jake Rodriguez did the excellent sound design, from the birds to a mewing cat to a crashing car, and lighting is by the always fine Alexander V. Nichols. If only director John Rando had paced the first act in a more sprightly manner or perhaps if Ayckbourn had written a better play … As it is, once round this “Garden” was one time too many.