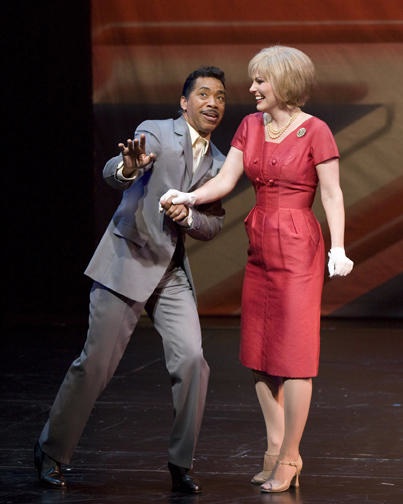 Obba Babatundé as Sammy Davis, Jr. and Heather Ayers as May Britt. Photo by Craig Schwartz.

Sammy Davis, Jr. was undoubtably a giant of American entertainment. His talents, revealed at the early age of four by show biz veterans and family members Sammy Davis, Sr. (his father) and Will Mastin (his uncle), were many. He sang, acted and danced, played several instruments, and above all, possessed an unparalleled stage presence.

It is no wonder that two-time Academy Award and Grammy Award-winner Leslie Bricusse, who, with Tony Newly, wrote many classic hits for Sammy Davis, Jr. , wanted to share the entertainer’s extraordinary life with audiences. But this venture presents two main challenges. First, you’d have to find someone talented enough to interpret the iconic, almost untouchable character that was Sammy Davis, Jr.  Second, condensing 60 rich years of show business into a two-hour musical could be problematic.

The Old Globe production has met the first challenge with multi-talented Obba Babatundé (Dreamgirls, Chicago, Grind, Timbuktu), who produces a very convincing and touching Sammy. Babatundé gives his all and more to the audience and it pays off. He is in great company with actors such as Ted Louis Levy in the role of Sammy Davis, Sr., Lance Roberts as Will Mastin and the remarkable Ann Duquesnay as grandma Rosa Davis, just to name a few.

But unfortunately, the show, while being musically very strong with songs that take your breath away (how could it be otherwise with Leslie Bricusse’s genius) and while displaying amazing performances, doesn’t deliver a meaningful story. Don’t get me wrong; it gives what seems to be an accurate and most complete account of Sammy Davis, Jr.’s life and does so in a very entertaining fashion, with touching moments, but it is more of a biographical account than an exploration of human character.

Still, this shortfall should not deter fans and musical review amateurs alike to go to the theatre and enjoy this piece.