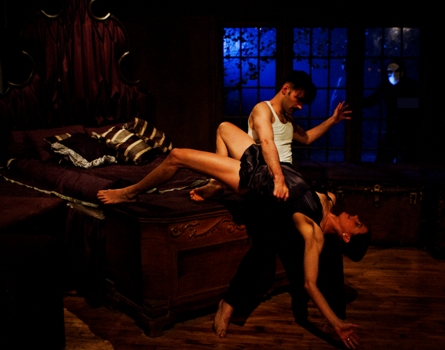 In the English theater company Punchdrunk’s site-specific productions, audience members explore a sprawling environment to create their own individual, nonlinear experiences. “Sleep No More,” an adaptation of “Macbeth” bounced off of images and settings and music taken from Hitchcock movies (“Rebecca” and “Vertigo”), is the company’s New York debut, and it’s a doozy. For the occasion, Punchdrunk took over a former nightclub space in far west Chelsea—three warehouse spaces six stories high—and built 100 separate rooms or environments to house the production.

When you arrive, at one of three staggered entry times per night, you’re given a beaky facemask, piled into an elevator, and dropped off at a random floor with only three instructions: “1) Keep your mask on at all times, and keep your mouth shut. 2) Things are not what they seem. 3) Fortune favors the bold.” After that, you’re on your own to poke through the rooms (hotel rooms, apothecaries, children’s bedrooms, a psychiatric ward, a ballroom, a fabric shop, a loft-sized labyrinth with 10-foot-high walls made of sticks, to name just a few), follow characters around and witness their wordless interactions, and/or create your own intermission and meet friends in the bar to exchange notes on what you’ve seen.

There have been numerous similar events in New York theater in recent years that kept the audience on its feet interacting with the performance – “De La Guarda” and “Fuerza Bruta,” “Tony n’ Tina’s Wedding,” “The Donkey Show” (an adaptation of “A Midsummer Night’s Dream” performed in a disco with the characters singing or lip-synching to 1970s classics). My main point of reference for “Sleep No More” is “Tamara,” a legendary theater piece that I saw when it premiered at the Toronto International Theater Festival in 1981 and later when it was mounted at the Park Avenue Armory in New York, after a long high-visibility run in Hollywood. Written by John Krizanc and spectacularly staged by Richard Rose, “Tamara” centered on the love affair between two artists in Mussolini-era Italy, Tamara de Lempicka and Gabriele D’Annunzio. Full of intrigue and melodramatic action, the play took place all over a giant house, so no two viewers would see the exact same play – by choosing to follow one scene, you’d miss out on another, so you’d have to constantly extrapolate from small bits of information or catch up at intermission with other spectators.

“Sleep No More” is a lot like that, on a somewhat grander scale—you can run yourself ragged in three hours, tromping up and down stairs—but the narrative experience is much less complete. Presumably everybody knows the rough outline of Shakespeare’s play, but the actors don’t perform “Macbeth” from beginning to end at all. What excerpts we see are atomized into small choreographic gestures that the actor-dancers can repeat for five minutes at a time, while spectators trickle in or out of the vicinity. The production explicitly conjures a dreamlike state. Scenes erupt and evaporate unpredictably. You’re constantly stumbling upon curiously detailed environments (a creepy herbalist’s den with a bald female witch crouched over a bowl of water), murky images incongruously juxtaposed (a male doctor laying out pairs of wet pajamas in a row of empty bathtubs), mysterious eruptions of light and sound, and whole sequences of activity repeated. Having the audience masked is a brilliant touch – we become anonymous, undifferentiated ghost-like presences who disappear into the background or create a weird ectoplasmic swarm around the actors with exposed faces.

Although I knew in advance that the show had something to do with “Macbeth” and Hitchcock, I was surprised how little of what I encountered had to do with either of those sources. Here, for instance, are some scraps of my experience:

• I got off the elevator on the third floor and turned right into a cemetery with an empty baby carriage parked conspicuously on the path. Walking through some cloth curtains, I found the crumbling walls of a torn-down building with a few pieces of spooky statuary and a glassed-in room with a bathtub on a platform and a bed where an actress was rolling around doing what I took to be some version of Lady Macbeth’s “Out, damned spot” speech. Wandering around this floor, I spied another actor, a sad-looking woman carrying a suitcase, and I followed her for a while. She seemed to be looking for an address and in a large deserted barroom space consulted a lady in a glamorous red dress, who sat at a table and gave her a sort of psychic reading. The sad lady showed a picture of someone she’s looking for (her mother?) and cried. The lady in the red dress gathered the tears in a tiny jar and gave her a key. The lady in the red dress then went out in the hallway and fed the jar of tears to a guy with a punky haircut, whom I followed to a small suite with a closed door, which he unlocked. I tried to follow him in, he pretended to throttle me, smiled, let me go, and pushed me out of the room and shut it. Shortly the sad lady showed up, used her own key to unlock the door, unpacked her luggage, and lay down for a nap. I waited for the guy with the punky haircut to appear from a conspicuously man-sized armoire, but another man popped out of it. He hovered over the sleeping woman, covered her with a blanket, and left the way we came in. She woke up and left through the wardrobe. I followed her through this secret passageway until we emerged onto a hallway, and she disappeared into a shop.

• Somehow I found my way down to the basement of the building, a ballroom surrounded by balconies with a platform at one end set with a banquet table. Suddenly, many of the actors showed up in formal attire for a fancy-dress ball. Four or five couples danced to piped-in 1930s big-band swing (“Tuxedo Junction”). When the dance ended, I followed a short mustachioed fellow as he took off running up the stairs. When he got to the office of what looked like a musty old detective agency, he ran into the back room and injected something into his neck. At his desk was the sad lady snooping through his stuff—he examined her neck and her arms. For needle tracks? Tooth marks? I started to wonder if all the characters were meant to be vampires, deathless creatures wandering around in the dark. Since I had also walked through the psych ward, I wondered if perhaps the conceit of the show was that the play was being enacted by mental patients, a la “Marat/Sade.” Nothing about “Sleep No More” definitively proves or disproves either of these theories.

• The next time I happened to encounter the guy with the punky haircut, I followed him and the sound of blasting techno music to the formerly deserted barroom space where the lady in the red dress met the sad lady with the suitcase. Now there was some kind of orgiastic rave going on, Macbeth communing with the three witches, one of them a naked man wearing a goat’s head and dancing on a table while the witches passed around a bloody baby-doll. An hour or so later, I came across this sequence being replayed, so clearly it’s one of the key scenes that the creators don’t want audiences to miss.

• My companion and I went our separate ways from the beginning, but someone had tipped us off that we might want to be down around Lady Macbeth’s bathtub at 9:40. That turned out to be one of several times the Macbeths arrived together, with him covered in blood. She stripped him naked and put him in the tub to wash off the blood, which led to quite intimate and sexy kissing. Then they sprawled in the bed and cuddled briefly before rising and getting dressed again and leaving.

It’s difficult to evaluate individual performances because you never get to see an actor except in random snatches. A program with cast list is available as you leave, but good luck trying to figure out who is who. The lady in the red dress apparently is Hecate (played by Careena Melia). Only by looking at pictures online was I able to identify the sad-looking lady as Tori Sparks, credited as one of several Lady Macbeths and also one of two performers playing someone named Agnes Naismith. Who’s that? I thought she might be some Hitchcock character I didn’t recognize, but Google told me she’s one of “the Paisley witches” put on trial in Scotland in 1697—aha! Another is John Reid, who hanged himself in his prison cell—which might explain the character in “Sleep No More” who keeps trying to kill himself…

Clearly, you can see “Sleep No More” repeatedly and have different experiences each time. The producers probably count on that. The show has already gained a cult audience with a lot of repeat visitors. There has been very little advertising except by hipster word-of-mouth, and its physical demands makes for a self-selecting audience of spry youngsters (virtually no matinee ladies in sight). It’s really fun, quite disorienting, a little exhausting, and it can engender a persistently frustrating suspicion that you’re missing out on the “real” action, that something cooler or better is happening somewhere else. It reminded me of seeing the Wooster Group’s idiosyncratic stagings of classics—at first you can’t help trying to follow the storyline, and it’s only when you go back a second time having given up following the story that much of the production’s magic and inventiveness reveal themselves. Overall, it’s a spectacular piece of design work by director Felix Barrett with Livi Vaughan and Beatrice Minns.

(19852)
$5.94 (as of January 21, 2021 - More infoProduct prices and availability are accurate as of the date/time indicated and are subject to change. Any price and availability information displayed on [relevant Amazon Site(s), as applicable] at the time of purchase will apply to the purchase of this product.)
related posts