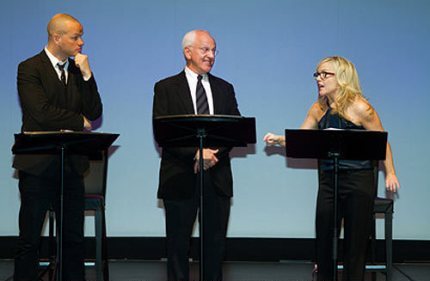 There’s something of a “rock, paper, scissors” aspect to the issue of marriage equality in America today as gays and lesbians seek it, conservatives and religious fundamentalists oppose it, and lower courts make decisions that everyone realizes are interim until the U.S. Supreme Court tenders its decision.

Will the Supremes prove to be a rock and deny this right to a segment of Americans? In the event, would the gay community wrap such an unjust decision in the paper of a new, more insistent strategy? And, if so, would the conservatives use the scissors of Republican-dominated state legislatures to cut that effort, that hope, into ribbons?

While you’re thinking of still other metaphorical combinations, get yourself to the L.A. Gay & Lesbian Center’s Renberg Theatre in Hollywood and consider the issue though nine sparkling mini-plays about men and women who want the right to marry whomever they want, regardless of gender.

In Wright’s clever, witty “On Facebook,” for one example, the six actors sit side by side by side, as if on-line, and respond to each other’s observations about gay marriage. One character, Beverly, is homophobic. Another, Shane, is a hot-head who doesn’t suffer homophobic fools gladly. In short order, they’re flinging verbal darts at each other:

Beverly [Harris]: “Ding! We have gay marriage here [Iowa] and I wish they’d repeal it. Now don’t hate me. I have lots of gay friends but I just hate it when you people use the word ‘marriage.’ Can’t you call it something else? I don’t want to hurt your feelings. X’s and O’s.”

Shane [Paige]: “Ding! Hey, lady, back off! You’re salting our wounds and with ignorance.”

Beverly: “Ding! Have a nice evening. I’m sure we could be friends. Smiley Face.”

Oliver [Rubinstein], however, intervenes but doesn’t let Beverly get away with the phony “some-of-my-best-friends-are…” pretense: “Ding! Poor Beverly. She wants to embrace conservative ideology, but she doesn’t want to take responsibility for the emotional havoc it wreaks. After all, she’s in a luxurious place. She can espouse these uncharitable ‘opinions’ and scatter them willy‐nilly across Facebook, then rush back to the security of her ‘straight’ world, her husband, and the like‐mindedness of her community, her church, and her coworkers…except, of course for the few gay presences in her life…the ‘nice man’ who cuts her hair, or that ‘hilarious’ fellow at the florist. She gets to embrace them as her ‘gay friends’ and condescend at the same time.”

MacLeods”s “This Flight Tonight” captures the uncertainty and doubts in a gay person’s mind when confronting her partner’s straight family. Hannah and Allie are about to board a flight to Des Moines, to visit Hannah’s family, when Allie gets a sudden case of cold feet.

Hannah [Harris]: “But my parents are waiting for us at the airport!”

Allie [Gilpin]: “Why does your father keep giving me power tools? I don’t know how to use power tools!”

Hannah: “Well, you did put in that French door…”

Allie: “I was only there when the guy from Lowe’s came! [imitating Hannah’s father] ‘Lesbian gals love power tools!'”

The sly reference to sex toys triggered one of the heartiest laughs of the evening.

While humor and wit color eight of these nine one-acts, Kaufman’s “London Mosquitos” is a somber, affecting portrayal of an older man reminiscing about his life with a beloved partner of 46 years, Paul, at a memorial service.

Joe, as performed by Rubinstein, clearly has stored up many pleasant memories of this long and satisfying relationship as to soften the sharp edge of loss. He recalls, with a wistful smile, the first moment when he and Paul returned to their college dorm after double-dating two girls and accepted the reality of the attraction and affection that has been building in each: “…after he kissed me, it was impossible to pretend any longer….when he left, I couldn’t sleep that night. So the next day I blurted it out, I said, you kissed me last night. He said yeah, I did. I asked what that meant? He said: ‘You know what it means as well as I do! (Pause) We should stop dating women!’ That was Paul, he didn’t have much patience for anything but the truth. And then we were together for 46 years… until last Thursday.

At the end of the plays, the audience is invited to enjoy a piece of wedding cake with the cast in the Renberg foyer and discuss themes and thoughts raised by the plays. It could be the climax of almost any wedding celebration, so why are some people entitled to it and others are not? Why?