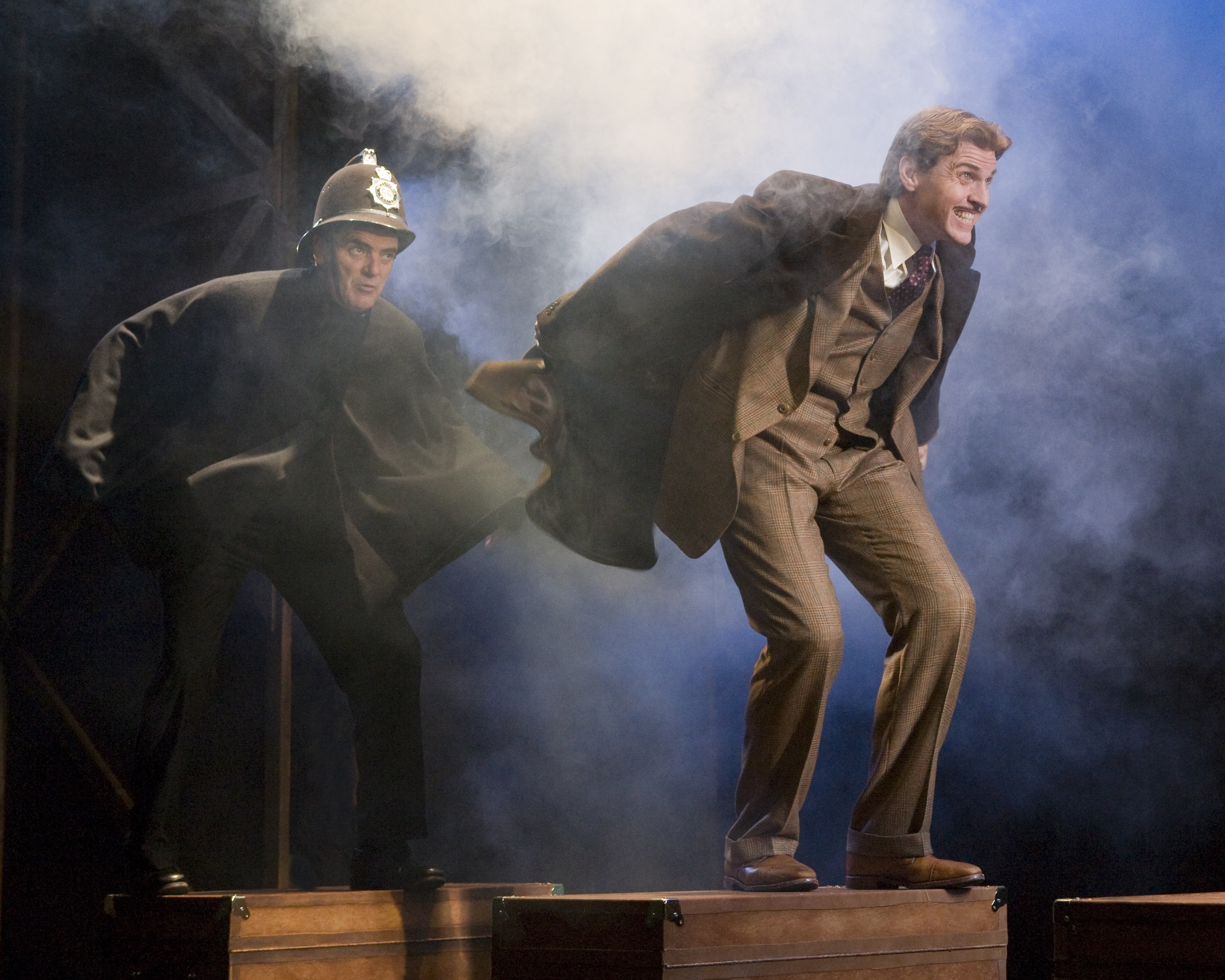 “Alfred Hitchcock’s The 39 Steps” climbs a giddy stairway to high hilarity. This zany spoof of 40s-style movie mysteries has delighted audiences in long runs from London to Broadway and now it has hit the road. Lucky road; lucky us.

The reason why the master of cinematic suspense’s name precedes the title is not just a copyright bow to the original film. The show is more about Hitchcock and his trademark gimmicks – including the one where he makes a brief appearance in each one of his movies – than anything else. Canny observers will catch references to “Vertigo,” “Rear Window,” “North by Northwest,” “Psycho” and more. Swelling mood music accompanies each climactic scene and there is enough atmospheric stage fog to blanket San Francisco. The lighting, by Kevin Adams, almost is a character in itself and the special effects are, sometimes literally, to die for. Wherever the cast of four is not adequate to swell the scene, shadow puppets jump in to do the job. A tiny train chugs across the stage and projections of planes soaring over wheat fields as the hapless hero flees conjure up Cary Grant in one of film history’s most famous flights. Even discounting the fact that four people become a cast of, if not thousands, at least several dozen, this is a theatrical tour de force.

But Claire Brownell, Ted Deasy, Eric Hissom and Scott Parkinson are the true wonders of this frenetic world. Deasy plays Richard Hannay, a world-weary loner who gets pulled into a spy scheme when he finds a mysterious woman stabbed to death in his apartment. Brownell plays that woman (with a heavy Eastern European accent) and all the others – Pamela, a stranger on a train (get it?), and, most marvelously, Margaret, a Scottish farm wife who aids Hannay in his flight from the law and falls madly in love with him along the way. Hissom and Parkinson play everybody else – Scotland Yard inspectors, stage illusionists, Nazi spies (and their wives), train conductors and Highlands country folk. And they do it at a breakneck pace, changing hats and accents in the middle of a line delivery. Watching these two is more than half the fun of the show.

The plot isn’t much. Hannay, suddenly finding himself wanted for the murder of the mysterious woman found in his flat, takes off, his only clue a map found in her pocket, pinpointing a remote location on the Scottish moors. Pursued by the cops, poor Richard runs over hill and dale, across the roof of a train and hangs from the girders of a bridge. Margaret helps him briefly but then her jealous husband turns him in and he’s on the lam again. Pamela keeps turning up and they exchange witty barbs of mutual dislike reminiscent of Grant and Grace Kelly in “To Catch a Thief. Of course everybody knows they will end up in each other’s arms at the end. A plot to smuggle state secrets out of the country is uncovered. The villain is a respected professor who really is a Nazi operative. He must be stopped and Hannay is England’s only hope. At one point in the proceedings, Pamela and Richard find themselves handcuffed together as they check into a questionable hotel during a midnight thunderstorm (sound familiar? – no shower scene though). How they extricate themselves is one of many sight gags in the show. Viewers are advised not to blink. They might miss something.

How the writers get them out of the plot is equally convoluted but a lot of fun. Director Maria Aitken, who was nominated for a Tony for the Broadway production and won the Olivier for the one in the West End, knows her way up and down and around “The 39 Steps.” It’s high comedy and well worth the climb.