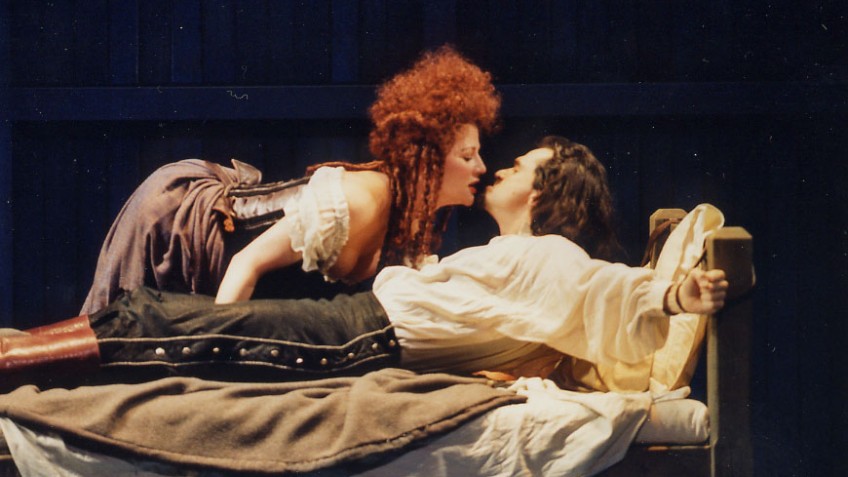 With historical records from the sixteenth century a whole lot less than complete, it’s no wonder that generations of scholars have speculated endlessly about the most produced playwright and, arguably, the greatest poet in the English language, William Shakespeare. There are running debates about whether he actually wrote what is now generally credited to him–how did this country bumpkin develop such worldly wisdom? And, too, there is inquiry and discussion about the identity of the real subject of the love sonnets which has often led to the hypothesis that Shakespeare might have been a homosexual.

Playwright Amy Freed has taken both subjects into account in her funny frisee of a farce, The Beard of Avon, which had its world premiere at the South Coast Rep last year and now has been smartly mounted by American Conservatory Theater. Freed wastes no time setting up Will’s character as a likable, if naive, farmboy, married to Ann Hathaway, the paternity of whose child seems questionable. Shakespeare, who has a gift for rhyming couplets,is captivated by the local appearance of a traveling commedia troupe (hammy players performing a bawdy version of Agrippina’s Daughter) and quickly departs for London to seek his destiny in the theater.

In London, and in a mood of high camp, Freed intoduces manly Edward de Vere (the earl of Oxford) and his lover, effete Henry Wriothesley (the earl of Southampton), bewigged in long blond curls. De Vere, unabashedly bisexual, but a closeted playwright, enlists Shakespeare as his "beard"–Shakespeare’s name will appear as author of de Vere’s plays when they are produced. De Vere’s snobbishness is part of his motivation, for, after all, "to fraternize with actors is to debase oneself," an ironically loaded line, indeed, coming from this amusingly licentious libertine. But then, it appears that some of Shakespeare’s gift for rhyming is applied to de Vere’s texts, so the question of authorship gets muddied very quickly. Freed cleverly throws multiple possibilities into the scenario, including the suggestion that Elizabeth I herself may have had a play performed with Shakespeare as her beard.

Freed’s humor operates at several levels. The more Shakespeare the viewer knows, the more likely to pick up on the allusions and quotations sprinkled throughout. But Fried also–in best Elizabethan tradition–is not beyond flagrant punning, sexual waggery, and outright slapstick. Some of her best mots are based on anachronisms–contemporary concepts or phrases restated in the language of the period: "the crisis of thy middle years," "Thou are in water most enormously hot" or, when forced to admit his inadequate literacy, Shakespeare refers to "a most pernicious deficit of my attention’s ordering." Even the lowest gag works here, due to the lightness of approach and the style of delivery–Henry says, "Oh Edward! Look at the time. We’re late" as he holds up an hour glass.

It’s all great tongue-in-cheek fun, laced with both intelligence and an obvious love for the subject matter on Freed’s part. The performances by the entire cast are stylish with firm direction by Mark Rucker keeping it all bouyantly afloat. Matthew Boston as Shakespeare and Marco Barricelli as Edward (both A.C.T. regulars) marvelously contrast the rube and the sophisticate, the naive and the jaded, both of them very funny indeed as they capture the humanity of their characters’ weaknesses.

Riccardo Hernandez’ sets are attractive, appropriate, and, most importantly, superbly functional, allowing quick changes of scene with a minimum of fuss and clutter. Cheerful splashes of color, a rolling platform, a sliding panel or two, a curtain, a bale of hay, and other elements are all within an architectural framework with a Tudor-like look. Beaver Bauer’s costumes variously achieve elegance and hilarity, in keeping with the hijinks of the script.

Productions of The Beard of Avon are sprouting in regional theatres all over the United States. Farce requires great acting and directing skill to maintain the pacing and lightness essential to its success. A.C.T.’s production is of benchmark quality.