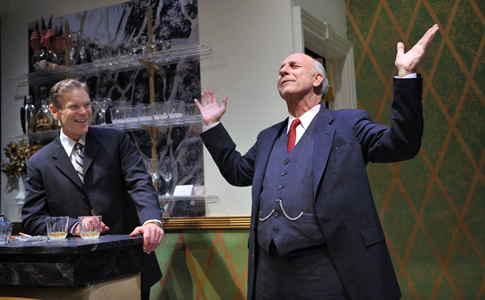 Once upon a time when television was in black and white and the talking heads didn’t talk nearly as much and primary campaigns didn’t last nearly as long, the party conventions meant something more than they do today. People actually got nominated and sometimes it was a surprise. Such a situation fuels the plot of Gore Vidal’s “The Best Man,” cleverly unveiled by Berkeley’s little Aurora Theatre on the cusp of both conventions and as relevant to politics in 2008 as when it first bowed almost half a century ago. Another proof of the maxim that “the more things change, the more they stay the same.”

Vidal, a prolific essayist, critic, novelist and the scion of a distinguished political family, wasn’t making it all up either. He knew what he was talking about. In 1960, the year he wrote “The Best Man,” he ran (unsuccessfully) for Congress, one of two bids for political posts during his long career. Perhaps it is a good thing that he never made it into public office. It would have been a terrible loss to put all that writing talent into ephemeral political speeches. At least the play can be (and has been) performed again and again.

It’s a good story and could have been ripped right from the headlines of more recent years. Former Secretary of State William Russell (Charles Shaw Robinson) expects to be nominated on the first ballot. He’s the front runner despite his somewhat elitist air and persistent rumors of extra-marital exploits that just so happen to be true. His estranged wife, Alice (Emilie Talbot) has come along on the campaign trail strictly as window dressing. His opponent, Senator Joseph Cantwell (nice name) wonderfully played by Tim Kniffin, is the kind of ruthless, ambitious politician who will stop at nothing to get what he wants. He is all image and little substance. Cantwell’s people have dug up some medical files on Russell that indicate a psychiatric history (shades of Thomas Eagleton) and they are using them as leverage to get him to step down. Russell, who has some even dirtier mud to sling at his opponent, is torn between getting what he wants and taking the moral high ground.

Mediating between them, and acting as a foil for each, is the former president, Arthur Hockstader, good ol’ farm boy and veteran politico. It may be the best performance this reviewer has ever seen from Bay Area veteran Charles Dean … and we’ve seen a lot from this prolific actor. His Hockstader is hokey, jokey and dumb like a fox. It doesn’t hurt that he has some of Vidal’s best lines: “In those days you had to pour God over everything – like ketchup” or “Power is not a toy we give to good children.” Dean delivers them like the pro he is and it is a joy to watch.

Not all the characters are as powerfully drawn – or well portrayed. While Talbot’s long-suffering, dutiful wife is nicely played, Mabel Cantwell, the Southern blonde bombshell wife of the underdog, is a caricature of the type once typified by Judy Holliday in films. It may be a case of the actress, Deb Fink, overdoing it or perhaps director Tom Ross wanted it that way. Maybe Vidal simply overwrote Mabel but she is a little over the top. Another such, and even harder to take is Sue Ellen Gamadge, a powerful committeewoman. Elizabeth Benedict plays her in a series of outlandish 60s hats (costumes by Cassandra Carpenter) with the broadest of strokes. Benedict also appears in a cameo as candidate Russell’s psychiatrist, called in to testify to his mental stability. There, sober, sedate and concerned, she comes off very well. Michael Patrick Gaffney and Don Blades are excellent campaign managers.

But the real star is Vidal’s dialogue. It’s as spiffy as Richard Olmsted’s 60s hotel room set, replete with ersatz leather sofas, multiple ashtrays and the omnipresent bar, to which ex-President Hockstader makes frequent visits. “The Best Man” crackles with humor, wit, intelligence and compassion. It is such a well made play that, when the lights go up, you hardly realize that it has been carrying you along in its momentum for two-and-a half hours. And that’s a lot to say, especially in an election year.