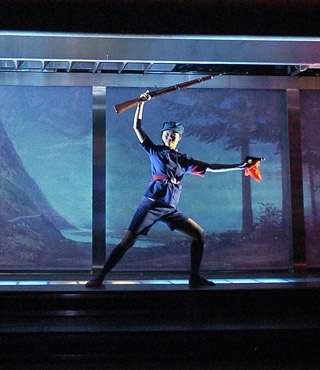 Québecois writer/director Robert Lepage has apparently been
vociferous in his insistence that The Blue Dragon be considered as a
wholly coherent and independent theatrical work, and not as a sequel
to his 1985 opus The Dragons’ Trilogy. Though what I have read about
the latter certainly would seem to suggest that the use of the same
central character and the structuring convention of the last of the
four coloured Chinese dragons representing the seasons of the year,
three of which were used in the previous play, would certainly
constitute a sequel, happily I am not in a position to say anything
much about the 1985 piece because I have not seen it. As such I am
content to approach The Blue Dragon as I see it here and now.

This is a technically spellbinding bit of theatrical production,
deploying a complex set of mechanical and electronic tools to render
the stage space into a variety of locations from a narrow Shanghai
apartment to a train station to a hi-tech bar to an art gallery to
the cityscape itself to the journey of a boat on the Yang-Tse river
to a snowy or starry sky to the calligraphic canvas of frustrated
artist Pierre Lamontaigne (Henri Chassé), a voluntary refugee from
his native Canada working as an art dealer in contemporary China. The
narrative is set in motion by the arrival of Claire Foret (Marie
Michaud), an old friend and ex-wife. She has come to China to adopt a
child in the hope of bringing meaning and focus to her fading life.
Pierre is romantically involved with young artist Xiao Ling (Tai Wei
Foo), who seems to also be pursuing her own sense of self-
determination in the burgeoning artistic climate of the new China. In
truth, the narrative isn’t particularly enthralling: predictable, low-
key to the point of self-erasure, feeling very much like the stuff of
a quiet chamber piece that no one would have any real interest in if
it were not presented against such a grand backdrop.

The backdrop, it seems, is everything. This is true not just in
technical terms, where the show is jaw-dropping, or in aesthetic
terms, where the blend of technologies facilitates a degree of
multimedia intertextuality including demonstrations of calligraphy,
Chinese television advertisements, and also provides a showcase for
some lovely dance performances by Tai Wei Foo, but in terms of the
issues the play is consciously raising about China itself as a
signifier of our times.

The Blue Dragon of Chinese mythology, we are told, is the avatar of
winter: invisible and embodied in thunder, lurking beneath the
surface of the earth. There is some sense of threat there, also of
power, and maybe of potential yet unrealised, but poised to emerge.
The production is cast in an array of blue lights and filters, and
occasionally blasts thunder and lightning almost comically underline
significant moments. Certainly there is a sense of an ominous
ordering presence underneath the foibles of these particular humans.
Each character seeks something deeper and more meaningful in their
lives (don’t we all?) and each is doing so in and through China. Xiao
Ling is the native, Pierre the émigré, Claire the visitor, and their
degree of ‘possession’ of China, and of things each of the others
desire (passion, talent, a child) means that as each encounters the
other, they are encountering dimensions of the experience of China –
a China at once both itself and yet significantly connected with the
West. The play works hard not to exoticise or Orientalise, but
inevitably in making China into a signifying presence, it
demonstrates interest only in those elements of politics, society,
and culture that inform its sub-text. I have no problem with this,
but the accusations of Orientalism that apparently dogged The
Dragons’ Trilogy would seem to be as easily leveled here if one were
so inclined. The entire show is about a type of dialogue with the
West, and the ending, in fact, connotes degrees of figurative
movement towards it.

There is no doubt that The Blue Dragon is impressive and engrossing
as a work of visual spectacle. As drama, it is avowedly small by
comparison with its lavish execution, but for all that it tells its
simple story clearly and well (though a triple-dip ending with three
‘suggested outcomes’ feels less profound than it perhaps might be
hoping). The performances are low key and naturalistic, though the
jarring accented English by French-Canadian actors and characters is
more distracting than you’d think. It also prompts speculation as to
why they didn’t just use French dialogue and surtitles, as they used
for the Chinese dialogue sequences. All-in-all audiences will
probably enjoy the audio-visual journey here more than they will find
themselves moved or involved by the events that transpire, and that
may be enough depending on your level of expectation for an evening’s
theatre.