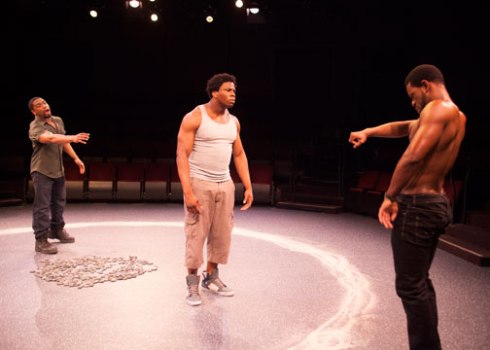 “The Brothers Size” is a tense modern fable with deeply archetypal characters and a pre-destined ending. Set in the Louisiana bayou, the play explores brotherhood, loyalty and just plain bad luck. And while these themes are well-worn, the play’s unique style—seasoned with percussion, ritual and West African mythology—shifts its axis just enough to make them new again.

On a stage that would need more clutter to become minimalist, brothers Ogun Henri Size (Joshua Elijah Reese) and Oshoosi Size (Okieriete Onaodowan) bicker constantly over sleep, food, work, whatever. The language is both harsh and appropriate. Ogun is tough, disciplined, focused. Oshoosi, who recently got out of prison, is laid back and confused. Ogun wants to help his brother get right with the world. Oshoosi simply wants to enjoy his freedom.

On the periphery, Elegba (Antwayn Hopper) is Oshoosi’s prison friend. He always appears suddenly, like a spirit, bringing laughter and trouble. When Elegba shows up, Oshoosi grins and Ogun frowns. There’s nothing good about this situation, and these tensions gradually pile up. The other shoe will drop; it’s just a question of when and how.

In lesser hands, this play could come off as a perpetuation of stereotypes, but the cast and director nimbly finesse these issues. Special kudos to Onaodowan, whose Oshoosi gives off an insatiable joie de vivre. However, the brother’s arguments can ramble on, with Elegba’s sudden appearances providing relief. Even in these gifted hands, a long speech is a long speech.

Throughout the action, percussionist Jonathan Melville Pratt provides evocative background music. Grab your seat early to catch the pre-show concert. Alagić’s direction is crisp and fluid. These relationships are filled with ambiguity, and she helps find every ounce. There’s a palpable sense of impending violence. From Ogun’s fruitless efforts to wake Oshoosi to the final outcome, we feel the tension.

The play grows stronger as it proceeds, ultimately swapping fruitless arguments for playful nostalgia. We get revelations in reverse order. In the end, “The Brothers Size” has a grand vision it doesn’t reach, but it comes achingly close.