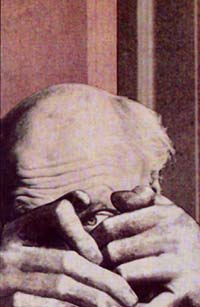 The most disturbing moment in Terrible Beauty Theatre Company’s production of The Caretaker comes when brothers Mick (Gary Egan) and Aston (Paul Kealyn) share a smile near the end of the play. The two men have spoken no words to one another in the course of the drama in which Aston, seemingly for reasons of pure altruism, has offered bedraggled derelict Davies (Vincent Fegan) lodgings at the brothers&#146; near run-down apartment building in West London.

A strange sort of power game seems to be afoot, with the blustering, tormenting Mick needling the old man for being an intruder exactly as much as Aston treats him with uncommon courtesy. In this production, Davies himself seems as confused by this as the audience must be, given the absurdity of the situation in real-world terms. Though he harangues and complains, manipulates and demands, and usually gets what he wants (more or less), Davies never seems in control, even when he thinks he is. When wielding a knife on both brothers at different times, there is never a sense that either man takes the threat very seriously. It seems a game to them, though the goals and outcomes are unclear.

Certainly there is some kind of psychological binarism here, and the balance of power between the brothers does oscillate, but the audience is never sure what either man wants or expects of this situation. The terrible smile comes shortly after an explosion of rage from Mick in which he spells out once and for all his contempt for the would-be conniving interloper, breaking the characteristic Pinteresque tension by smashing a thrift-store Buddha against the wall and screaming that Davies is nothing more than an animal.

Aston arrives, having already gently told Davies the night before that their living arrangement is not working out anymore and that he would like him to leave. He enters, sees Davies, looks at his brother, who looks back: they smile. It is an infinitely creepy moment, and seems to last an age though it only takes a few seconds. In this smile the sense of creeping dread rises. A lurking horror or a terrible revelation seems about to rupture the fabric of the world.

It doesn&#146;t, of course. Pinter pulls away from such obviousness. He leaves us with the uncertainty of the lived experience. It is another instant in time which passes without vanquishing our unease. Director Gary Egan (also Mick) seems entirely comfortable with Pinter&#146;s own stated view that The Caretaker is "a very straight forward play," allowing this moment, along with those that precede and follow it, to speak directly to the audience of a world in which the symbolism and abstraction is left entirely up to us.

Egan treats his characters and their world with a casual naturalism which makes every exchange of dialogue seem all the more frightening (and funny) for its simplicity. Far from the ultimately rather weighted existentialism of Beckett, there is a sense here that these characters are immersed in the everyday; that anything can or might happen, but that it probably won&#146;t, not so much because of the metaphysics of the eternal, but because of the schism between the internal and the external worlds of human beings. These are men full of dreams and intentions, ideas and aspirations, but they will never achieve closure – Godot will never come, but they won&#146;t have to repeat the action again: life will just go on.

Egan and Kealyn are terrific in this respect, conveying a sense of their characters as inscrutable and yet transparently human. Kealyn achieves a powerful weighty emptiness as Aston, speaking in simple, repetitive rhythms, answering simple questions with simple replies, and yet representing a massive physical presence suggesting a depth of humanity finally revealed in the signature monologue where he tells of his experience of electroshock therapy. Egan is full of clamorous menace as Mick, but also successfully conveys the sense of camaraderie which Davies mistakenly perceives in him as the balance of the tramp&#146;s loyalties begins to shift.

Fegan has a rather more difficult task with Davies. He is more the seeming victim of some private game here than is usually the case, and the actor, complete with an Ulster accent deliberately selected by Egan to highlight the problematic of otherness at the heart of the play, seems a tad more desperate than is good for his character, and this shows in some forced mannerisms.