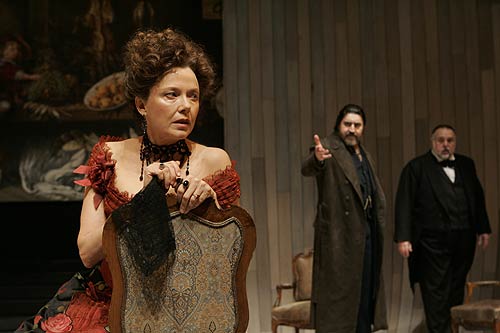 One might ask, "Why another Cherry Orchard?"Chekhov saw The Cherry Orchard as a comedy, but rarely is it played so. The current production, in a brisk new translation by Martin Sherman, delivers more humor and contemporary style than can be recalled. Designer Alexander Dodge has created a stunningly stark, weathered, bent wood stage which suggests the orchard, the manor, permanence and the passage of years. Annette Bening brings star power and energy to the role of the oblivious mother.

Equal to Bening&#146;s Ranyevskaya, the grand dame who cannot face the financial ruin of her family and persists in fiddling until Rome burns, is Alfred Molina&#146;s strong performance as Lopakhin, whose family had tilled the very estate he is now in position to purchase. He has the financial confidence of a self made man and the insecurity that often accompanies it.

Bening is the essence of charisma. It is no stretch to imagine her fleeing off to Paris when her seven year old drowns, followed by an entourage, quickly taking on a lover, gathering a salon about her and generally ignoring her estate and the two daughters she has left behind. Her sweeping re-entry into the family after a five year absence, entourage in tow, is greeted by them and the servants with joy and without reproach. Even if over the top, her grand style is a pleasure to watch. Lopakhin, still in thrall to the family (in this production he does not become mercenary until the final scenes), is the only voice raised to alert Ranyevskaya that her estate with its beloved cherry orchard is about to be buried in financial ruin.

Yes this Cherry Orchard is entertaining and beautiful to watch. Its commentary about the excesses of the upper class and the lack of opportunity for the under classes is definitely delivered with a spoonful of sugar to help the medicine go down. Sean Mathias&#146; direction carries the audience along with the folly of the family without the Schadenfreude generally associated with Lopakhin, nor the empathy one would normally have for Varya (Sarah Paulson), the older daughter who understands the families dire straights, is unheard, and buries herself in work and religion.

The only character to pull at the heartstrings is Firs (Alan Mandell), the servant who never left when the serfs were freed and who sees his importance in small tasks such as making sure the master is wearing the right trousers or coat. He is stooped and senile, accepted by the rest, noticed and loved much the same as an old cabinet is noticed and loved. When the estate is sold at auction &#150; to Lopakhin who earlier had tried to give them a strategy to keep part of it &#150; the family and servants disperse to begin new lives. Old Firs is sent to a hospital only to come back to the only home he has ever had. Alone and deserted he dies.

"You should not be in a theater watching a fictional life. You should be examining your own life," says the nihilistic tutor. Though easy to see as just entertainment, perhaps Chekhov&#146;s Russia at the turn of the last century has messages for today and that is why yet another Cherry Orchard.