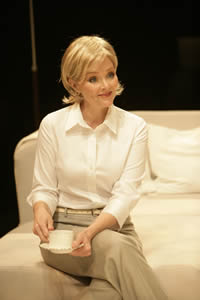 Sarah Ruhl’s play, The Clean House, begins innocently enough. The Brazilian maid, Matilde, a daughter of two comedians, loses interest in cleaning her uptight employer’s (Lane) house. Lane is an overworked physician who has given up the privilege of cleaning her own home, a slippery slope indeed. Enter Virginia, Lane’s housewife sister, whose compulsively cleaning habits come in handy to help the maid out. Actually, Virginia cleans while Matilde searches for the perfect joke, certainly a worthy pursuit for these unfunny times. Matilde, the zesty Josie de Guzman, imagines her parents endlessly giggling while Virginia scrubs, polishes, and folds. All is well until a pair of red underpants turn up, indicating that the steely doctor’s hubby may be on the cheat. Turns out, Charles, Lane’s surgeon husband is having an affair with Ana, one of his older mastectomy patients. Things get pretty strange at that point and continue in the direction of the whimsically surreal. Not cleaning does that to people. The play tumbles forth like a thread unwinding according to its own rules. Charles and Ana go off to the sea, Ana’s cancer returns, Matilde travels between both homes, Virginia freaks out, Charles goes off in search of a cure, the women take Ana into Lane’s home, and Ana dies. Nothing neat and organized there. Ruhl’s play gives up hope in order altogether. Solace and redemption are found in compassion, joy, and living as best we can within the ruins of our lives.

The Alley Theater’s production, under David Cromer’s direction, honors Ruhl’s fresh voice through and through. Cromer allows Ruhl’s play its own internal rhythm making the most of the play’s quirky charm. Josie de Guzman brings an ample curiosity and some impressive Portuguese to the role of the jokester maid. Who knew not cleaning could be such fun. Elizabeth Heflin nails the colorless Lane, who’s taste in furnishings match her cold demeanor. Her more human side shows up in the second act when she takes the dying Ana into her home. Paul Hope sails as Matilde’s father and matinée idol husband Charles, who performs a mastectomy on his beloved on the kitchen counter while serenading her with his sweet voice. He’s smooth as silk, forgivable, lovable, and downright nutty when he shows up with an Alaskan Yew tree. Alas, too late. The lively Ana has died, in the best way possible, from laughing. Karmin Murcelo imbues Ana with a potent optimism and earthy contrast to the emotionally zipped Lane. But it’s Annalee Jefferies who rules this unruly nest. She raises tidiness to sublime heights; she would straighten out the air if she could. Tilting her head like a bird, she prunes Lane’s already sterile and neat world like it’s rare form of possession. At one point, she implodes and makes a mess of Takeshi Kata’s sleek, but lifeless set. Ana dies laughing on the couch amidst the spilled coffee beans, dirt, and vacuum cleaner gunk. The message: Life is messy to begin with; clean less, laugh more.