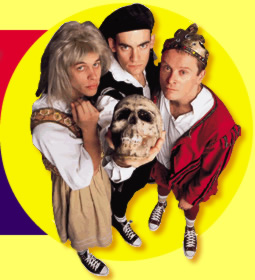 Basic to the enjoyment of most plays is the temporary suspension of disbelief. We know Hamlet is actually George Spelvin, a chap we might run into on the subway or see on the corner eating a hot dog. Those painted flats are not the battlements of Elsinore or Gertrude’s chamber; Yorick’s skull is not, alas, really anybody’s skull. We suspend our disbelief temporarily in order to enjoy the play.

To truly enjoy The Complete Works of William Shakespeare (Abridged), an hour and a half into which three madcap young actors cram all, yes, all of Shakespeare, the audience must engage in something else: the temporary suspension of sophistication. Over the doors to the Century Center for the Performing Arts there might well be a warning: Abandon Seriousness All Ye Who Enter Here.

It would also help the theatregoer to travel back in mind to that time of innocence called The Sophomore Year, for most of the humor here is indeed sophomoric, bawdy, wacky, silly, goofy, senseless, risque, and raunchy. It is also, once the viewer has slipped into the right frame of mind, absolutely hilarious.

On a skewed replica of the Globe Theatre, Peter Ackerman, Jeremy Shamos, and David Turner race through all the plays, paying special and ridiculously diverting attention to Romeo and Juliet, with Turner ludicrous but oddly fetching as Juliet in overblown drag. Turner mimes throwing up (for reasons that must remain known only to him) on the first row in most believable fashion. Titus Andronicus, one of Shakespeare’s bloodiest plays, is then presented as a cooking show with the rapist as the dish du jour, complete with jokes about finger food.

Act II is devoted entirely to a presentation of Hamlet, with Ackerman as the too, too tortured Dane, and Turner, with floor-length red braids, as Ophelia. Meanwhile, Shamos is by no means loafing offstage, but rather racing offstage to slip into yet another wacky costume and absurd characterization. They are three guys with charm, the sort of fellows with whom one might like to share a pint at a pub.

These three do something else that’s rather effective. Every once in a while, sometimes for just a few lines at a time, they slip into what might be considered a serious interpretation, perhaps just to impress a Shakespeare festival director who may have wandered in. But mostly it’s just very funny and outrageously silly–exactly what New York audiences need right now.