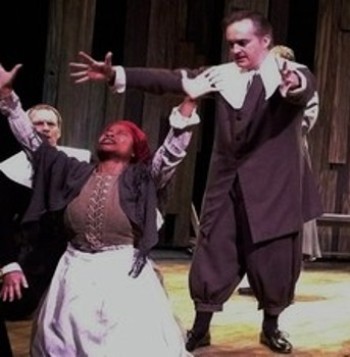 Even today, 60 years after this Arthur Miller masterpiece premiered in New York City, “The Crucible” still stings like salt on chafed skin.

The play was ostensibly about the craziness that erupted in Salem, Mass., in 1692 when seven young girls – supposedly afflicted by the devil – accused three adult women in the village of witchcraft. Before it ran its course, their hysteria claimed 20 innocent women and men, 19 by hanging and one by pressing (stacking a large number of heavy stones upon the unfortunate man).

But in Miller’s deft hands, the play was really about the madness of the U.S. Congress’ House Un-American Activities Committee (or HUAC) in the 1940s and 1950s, when communists were thought to be skulking under American beds and in basements, churches and schools, theaters and movie lots, intent on transforming this nation into another Soviet satellite.

The HUAC, comprised of both right-wing Republican and Democratic loonies, did not hang anyone but they certainly destroyed the livelihoods, reputations and families of a great many American men and women during that period. The Salem witch hunts were (and still are) an apt allegory for home-grown paranoia.

“The Crucible” is, by turns, a sad, infuriating, touching, surprising, funny (occasionally) and, ultimately, heartbreaking tale of religious zealotry and, by extension, Congressional madness. Producer Sean Thomas and director Bill Voorhees have assembled a truly remarkable cast to tell it.

Consider the alpha female of the feral pack of adolescent girls, Abigail Williams (Jessicah Neufeld). This slim, lovely young woman would seem to be an angel, at least in the beginning, but she yearns to take the place of Elizabeth Proctor (Lauren Dobbins Webb), the wife of John Proctor (Bill Voorhees), a 30-something farmer with whom she has been having sex. What better way to achieve her goal than to have Elizabeth accused, convicted and executed for the crime of witchcraft?

In a play where so many of the 21 cast members are very, very good, Paterson stands out as superb; with a crafty, domineering manner, he sets out trap after trap, like the skilled hunter that he is, to snare the unfortunate Salem residents.

Equally impressive is Voorhees, as John Proctor. His granitic honesty dooms, rather than saves, himself and his wife – to discredit Abigail, he must confess his illicit affair with her.· (Voorhees also doubles as the director of this production)

Props go also to Reverend John Hale (Anthony Backman) as a sort of court investigator who refuses to follow the madness of the young girls but sides, instead,· with Proctor and others against Danforth; Tituba (Bernadette Speakes), a slave imported from Barbados who is, to her misfortune, knowledgeable about spells, potions and charms; Reverend Parris (Trevor H. Olsen), a sniveling sycophant to Danforth, and Mary Warren (Rebecca Sigl), an adolescent servant in the Proctor household who first tells the truth about the duplicity of Abigail and the other girls only to recant later under Danforth’s devious questioning.

Notice should also be taken of the costumes – by Lauren Thomas – that are fittingly simple as clothing was then, more than 300 years ago, and the set – by Joel Daavid — that, in its· rough-cut late 17th century form, offers scant shelter from wind and rain and none at all from superstition and hysteria.

Like some gifted symphony conductor, Voorhees clearly coaxed, cajoled and/or coerced his 21 colleagues into a compelling dramatic ensemble. Arthur Miller would have been gratified to see his play done so well.