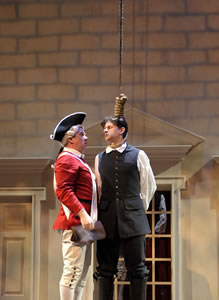 The best time to stage a revival of George Bernard Shaw’s revolutionary-era comedy “The Devil’s Disciple” might be around the Fourth of July. A close second is around the time of an election and that’s just what Berkeley’s Aurora Theatre is doing. Complete with Redcoats (actually only two or three of them; it’s a very small stage) and rebels, it’s a Yankee Doodle dandy reminder of how this country got going in the first place and what it is meant to be, penned by that witty Irishman, George Bernard Shaw. As such it’s a showcase for some recurring Shavian themes – the foolishness of war, the wondrousness of (some) women and the posturing of both religious and political hypocrites. And, being Shaw, it is very funny, much more so in the second act when General Burgoyne, deftly played by Warren David Keith, takes the stage with what seems to be all the best lines.

The title refers to Dick Dudgeon (Gabriel Marin), the black sheep son of an upright Christian family. Dick is a smuggler, a rake and a revolutionary who, much to the chagrin of his mother, has inherited the family fortune as the eldest son. Mom, played to the grumpy hilt by Trish Mulholland, is a real piece of work. A satire on the Puritan origins of the American colonies, she dominates the opening scene in high dudgeon, living up to her name. Then, fortunately, she kicks the bucket, sparing both her son and the audience from her never-ending complaint. Not to fault Mulholland who is an excellent complainer.

The kindly minister (Soren Oliver) has decided to befriend Dick Dudgeon, perhaps to reform him – although that seems to be an impossible task. To that end, he invites him to tea, served up by his much-younger, beautiful wife (a luminous Stacy Ross). So, guess what happens when the minister is suddenly called away, leaving the dashing roué and the lovely Judith alone in the house? Well, yeah, you’re right, but not in the way you think. She is distant and disapproving (perhaps signaling her repressed attraction to the man) until soldiers knock at the door and arrest him, thinking he is her husband. King George’s troops are on the defensive and they need a suspected rebel to hang as an example in each town they occupy. They already have dispensed with Dick’s uncle in a hamlet down the road and now they have come for the minister. Dudgeon puts on the reverend’s collar and coat and, murmuring to Judith that she must keep up the pretense and warn her husband of his danger, passionately kisses her goodbye. She passes out on the spot and awakes to find herself more than a little in love with the heroic young man.

The second act essentially is a courtroom scene. Dudgeon is in prison, scheduled to be hanged at noon after a summary rigged trial. Judith, having warned her husband, in hopes that he would come to the innocent man’s defense, is utterly disillusioned. The reverend has fled, taking a pair of pistols and most of the money in the house. It is up to her to put things right. But Dudgeon won’t let her. Enter General Burgoyne, head of the British forces, an improbable voice of sanity amid the madness of war. The rest is one of the wittiest scenes Shaw ever penned, concluding with a real surprise ending.

Aurora founding artistic director Barbara Oliver has directed an excellent cast. There is some real sexual tension between Marin and Ross and the lesser characters, in addition to old Mrs. Dudgeon, are finely drawn. These include Anthony Nemirovsky as the doltish younger Dudgeon son, Michael Ray Wisely as the kindly arresting sergeant and Tara Tomicevic as a penniless young orphan whom Dick Dudgeon befriends. But the absolute standout is Keith’s Burgoyne. If you peel away the layers of acerbic wit and boredom with humanity’s stupidities hidden under his red military coat, you can almost see Shaw himself peeping through. And they both are having a devil of a good time.