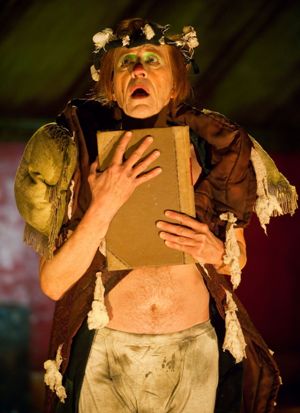 The Diary of a Madman

Context is everything, isn’t it? When Geoffrey Rush and Neil Armfield first collaborated on a stage adaptation of Nikolai Gogol’s novella “Diary of a Madman” (with playwright David Hirson) in 1989, they were up-and-coming theater artists just beginning to make a name for themselves in Australia. Their production at Sydney’s Company B Belvoir Theatre put them on the map in a big way. Seeing Rush’s showy performance in “Madman” directly led to filmmaker Scott Hicks casting him in “Shine,” the movie that introduced him to the wider world and won him an Academy Award. And Armfield went on to become artistic director of Belvoir Theatre for 16 years. I can imagine that stumbling upon this stylish, stylized production by unknown artists in a relatively intimate theater space would have felt like an exciting discovery.

Now, twenty-odd years later, it’s not quite the same story. Remounted in Sydney and imported to the Brooklyn Academy of Music, the show arrives in New York as a star vehicle, playing to audiences already psyched to see a famous actor nominated again this year for an Academy Award for “The King’s Speech.” It’s less of a wild card to be discovered than a certified hit that has to live up to its reputation.

Gogol’s story concerns Aksentii Ivanovich Poprishchin, a low-level Russian civil servant in the early 19th century St. Petersburg who spends his days at the office energetically sharpening quills for some slightly higher-ranking bureaucrat. By night, he journals obsessively about tensions at work, romantic fantasies involving his supervisor’s daughter, conversations he’s overheard between dogs on the street, and eventually his dawning realization that he has a very important date in Madrid—to be crowned the King of Spain. Clearly, the title of the piece alerts us that we’re witnessing the ravings of a nutcase, but Gogol’s prose lets that impression sneak up on us. However, in this production Rush’s appearance makes it clear from the get-go: red fright wig, green eye shadow, and more silly walks than any three episodes of Monty Python put together. Long before he starts dating diary entries “Marchtober 86th,” it’s clear that he’s Ready for the Asylum, which makes for a somewhat static two hours.

Rush’s physically arduous, clownish performance is admirable and inventive, always looking for ways to break the fourth wall and reach out to the audience, never content to interact with furniture in any normal way. It would be somewhat more impressive if we hadn’t seen him give a very similar performance two seasons ago on Broadway in Armfield’s staging of Ionesco’s rarely performed “Exit the King,” for which the actor deservedly won a Tony Award. In that show, he shared the stage with a company of terrific troupers (including Susan Sarandon and Lauren Ambrose as his two wives). In “Madman,” his character is attended by one of those supposedly comic servant characters, here a Finnish housekeeper (played by Yael Stone) whose slapsticky antics start out noisy and quickly morph into tedium.

What I liked best about the production was the highly theatrical design—super-saturated textured sets by Catherine Martin (famous for designing everything you’ve ever seen by Baz Luhrmann) and stark, expressionistic lighting by Mark Shelton. For all the show’s star power and scenic dazzle, it didn’t bring me nearly as close to the heart of Gogol’s story as a very simple production I saw in Boston in 1979 performed by a single actor named Frank Licato with no fancy lighting or sets. I have an indelible memory of a moment in the show where Licato simultaneously played the supervisor aggressively shouting at Poprishchin and the man being shouted at. I treasure that moment of surprising mastery probably the same way Sydney audiences relish the first time they saw an unknown actor named Geoffrey Rush onstage. Context is everything, isn’t it?