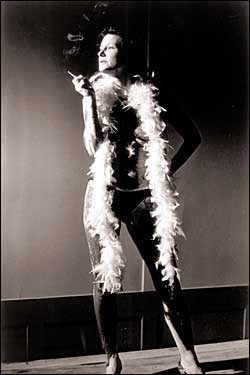 From the moment Karen Finley walks onto the stage, you are drowned in a torrent of words. Alternately raving, rhapsodic &#150; and, occasionally, calm and rational &#150; she assaults the audience with the force of her persona. A force of nature. A force to be reckoned with. A force field of her own. She is out of sight, out of control and possibly out of her mind.

The Distribution of Empathy, the performance artist&#146;s riff on themes of 9/11, debuted in New York and the Philadelphia Fringe Festival but as Finley herself notes, it&#146;s a natural for Berkeley. Honed and somewhat toned down since its initial performances, Finley has traded in the original lounge act setting for a plain table and chair, adorned only with two bottles of designer water. The cigarette is gone. So is the boa. She keeps her props in an old refrigerator stage left and there’s a piano player to the right. Video images of New York and the World Trade Center are projected onto a large screen to the rear. There is no nudity (Finley gained great notoriety for smearing her naked body with chocolate and/or honey in some of her earlier pieces) although, midway, she sheds her basic black for a tank top and mesh skirt through which a thong is clearly visible. And boots of course. Political references are pointed throughout.

&#147;It&#146;s all about me!&#148; she repeats several times and, at moments, one suspects this may be less sarcastic than true. In a voice that ranges over several octaves and often overwhelms her slight body, she relates tales of her love affairs with authors Charles Bukowski and Richard Brautigan, displays her continuing grief over her father&#146;s suicide and describes her experiences on post-9/11 airplane flights. But the national tragedy is the thread that links these personal experiences together. Although parts of Finley&#146;s 90-minute monologue are hysterically funny, there is an undercurrent of sadness, shock and horror, underlined by the musical accompaniment and the images on the screen.

At the end, she requests the video to be turned off and, placing two wine bottle bags over the water bottles, concludes against the giant shadow she has created. It is the Twin Towers, of course and, as she leaves the stage disjointedly singing the lyrics of Peter, Paul and Mary&#146;s &#147;Leavin&#146; on a Jet Plane,&#148; there is a heavy emotional impact. It is like a punch to the midsection and you feel it in your gut long after the house lights go down. It&#146;s like you have participated in someone else&#146;s nightmare (an apt description of how most of us felt the pain of the 9/11 attacks) or had an out-of-body experience.

More than a decade ago, Finley and three other performance artists (who came to be known as the NEA Four) sued the National Endowment for the Arts after having their grants pulled in the face of congressional opposition to alleged indecency. The artists pursued the matter all the way to the U.S. Supreme Court, regaining their grants and overturning the indecent language clause in the NEA grant process rules. Ten years later, there still is some indecent language in Finley&#146;s act &#150; words like &#147;war,&#148; &#147;hate&#148; and &#147;death&#148; among them. And they are used to devastating effect. So, take that, Jesse Helms.